It happened last night in Fresno, California. The first drummer of Pearl Jam has joined on stage the ex bandmates with whom he has played almost all the songs of Ten. 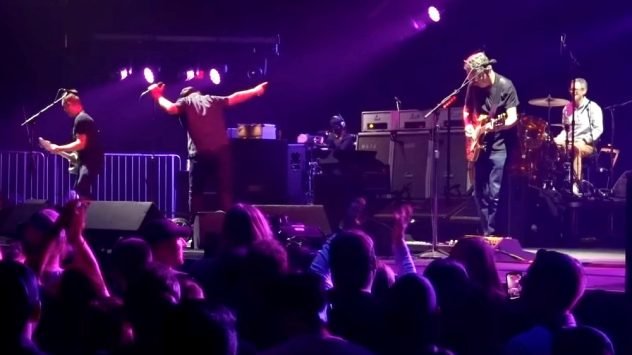 On May 11, 2022, Matt Cameron tested positive for COVID-19 and was unable to perform with Pearl Jam at their most recent concerts.

For the first two concerts scheduled without Cameron – absent from a Pearl Jam concert for the first time since May 1998 (month and year in which he entered the line-up permanently) – the Seattle group got help from friends and some fan.

On the first date in Oakland on May 12, their session player Josh Klinghoffer played the drums on some tracks, while the great Richard Stuverud sat behind the skins on others. Richard Stuverud plays drums with the Fastbacks, on his solo records and in all the parallel projects by Jeff Ament – Three Fish, Tres Mts., RNDM.

In the second Oakland concert, the same formula was repeated, with the addition of a 18 years old fan – Kai Neukermans, from the local band, The Alive – who played drums on Mind Your Manners. For the first date instead they had the fan Josh Arroyo take the stage to play drums on Yellow Ledbetter.

No one would have expected, however, that during yesterday’s show in Fresno, Dave Krusen, the first drummer of the group, active from 1990 to 1991, who recorded Ten, would show up on stage to play (almost) all the tracks of the debut album of the band (with the exception of Release, not present in the setlist of the evening).

Dave also joined the group in an outtake from that era, State of Love and Trust, in his first performance with the group since the 2017 Rock ‘n’ Roll Hall of Fame exhibition, where he played Alive.

For the rest of the songs, Richard Stuverud and Josh Klinghoffer alternated on drums, as happened in Oakland.

Matt Cameron, who will be able to return to the stage starting from the next Pearl Jam show, May 18 in Sacramento, was recently interviewed by Rolling Stone about Taylor Hawkins, confirming that the Foo Fighters drummer could no longer keep up with his band’s touring rhythm.

As Rolling Stone reports, Taylor told Matt Cameron that he had pointed this out to both the Foo Fighters manager and Dave Grohl, but they did nothing to help Hawkins.