Share on EmailShare on FacebookShare on TwitterShare on WhatsAppShare on Telegram
The poster made by Pearl Jam to promote their show at Washington-Grizzly Stadium in Missoula has created a lot of controversy in the United States. The poster was designed by Jeff Ament together with Bobby “Draws Skulls” Brown and depicts a White House set on fire with the corpse of Donald Trump being eaten by an eagle on the front lawn.

The first one to speak against the poster has been the Republican Senate candidate Matt Rosendale, who wrote on Twitter: “This poster from Pearl Jam is disgusting and reprehensible. It depicts a dead President Trump and a burning White House”, and he invited Jon Tester – the Democratic senator of Montana to whom Pearl Jam donated part of the proceeds of the show – “to denounce this act of violence and blatant display of extremism”. A Fox News journalist, Chad Pergram, accused Tester of supporting the far left since he hasn’t officially distanced himself from the image.

Jeff Ament released a statement to Rolling Stone magazine: “The role of artists is to make people think and feel, and the current administration has us thinking and feeling, I was the sole conceptualist of this poster, and I welcome all interpretations and discourse. Love, from the First Amendment, Jeff Ament”.

The First Amendment of United States Constitution guarantees freedom of press and speech. 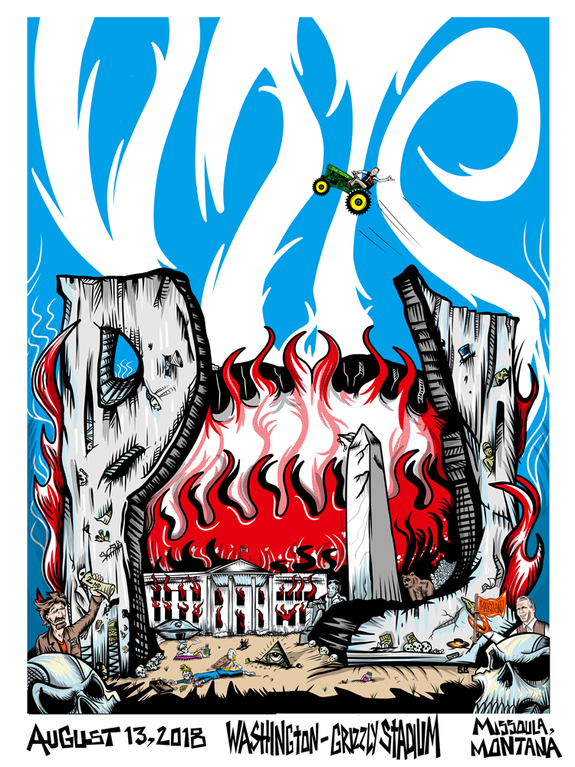