With Blue we talked about his first meeting with Eddie Vedder, the feeling of working behind the scenes of Pearl Jam concerts and the first time he saw the band live, during Vs. tour.

Not only, we talked about his experiences with R.E.M, Peter Gabriel, Snow Patrol and many more. Enjoy.

Hi Blue and welcome to PearlJamOnline.it.

Thank you and ciao.

Ciao. Blue, when did you think you wanted to be a filmmaker?

Well I knew from an early age, around 10 or 11 years old that I wanted to be a part of the marriage between music and television. During the first gig I ever attended at 14 years old I had a feeling which confirmed that I had to be involved creatively in live music somehow. The first gig was The Adicts, King Kurt and Anti Nowhere League at The Lyceum Ballroom in Leicester Square, London. Mad punk fun.

My first gig, back in 1994, was Pink Floyd, but The Adicts, King Kurt and Anti Nowhere League on the same line up: amazing! Talking about movies, what are your favorite directors and your favorite films and/or video concerts?

Michel Gondry – his music videos and their ethereal, childish, home made quality appeals to me as do his films. Coen Brothers, Armando Ianucci, films like The Big Lebowski and The Death of Stalin are beyond funny, and clever, I love the timing. Some of Spielberg’s films I love because they’re wonderfully escapist, ethereal – Close Encounters, Jaws. I like 1970’s America – Skateboarding, BMX, Moto-X – the colours and designs, texture all really do it for me. I liked the Spider-Man: Into the Spider-Verse very much, seemed a perfect relationship between story and picture. I also like some horror movies including B and Gothic Horror because of their texture and scratchiness, darkness and wanting more information that can’t be seen because of how they’re lit, graded and edited. Taika Waititi – I liked Jojo Rabbit and the Ragnarok films he directed. Stanley Kubrick of course – Clockwork Orange and Dr. Strangelove, The Shining. Rob Zombie, he’s hella fun.

Tim Pope made some superb promos for The Cure, I like them all. Live concert-wise I like the films which go off into a place which presents itself as shapes, colours, feelings as well as superbly shot and edited coverage of a band playing. Details, examining shots for long enough for me to be drawn in and fascinated in how a singer sings and how a band play individually and together as a unit while projecting themselves, their energy and their art towards an audience.

I can watch hours of Joey Jordsion play drums as an isolated track, same for vocalists, to watch and learn how they control their breathing and deliver a live vocal. My friend Ed Coleman at Big Noise Films is one of my favourite multicam directors at the moment. I like unusual, irreverent treatments when it comes to live concert films. Honestly I look back at my (Depeche Mode) Touring The Angel film and think how the fuck did I get away with doing that with the screens let alone the film!

I admired several of your works, from R.E.M. Live to Snow Patrol Live At Royal Albert Hall. What was it like working with all these great musicians?

R.E.M. was another dream come true, I felt that I developed my style on that 2005 Tour. I could make it all up as I went along and Michael let me go full throttle. Each night was different, we had more or less the same aesthetic in mind and once that side of my imagination was open and allowed to free run along with how much their music affected me I was able to go bonkers with it every show. The film was great too, Live In Dublin, a mad mixture of analogue roughness and textures with neon and that LED hum in places, just wonderful.

Depeche Mode’s 2006 Touring The Angel Tour was super special too, just rad and different each night, rough and visceral in places then beautiful and calm in others both for the live screen show and the film. Peter Gabriel’s tours have been insanely brilliant too, so many gags but my favourite was The New Blood / Scratch My Back Tour, plus the 3D and 2D films. New ideas every day, blowing sand with a straw to reveal camera picture on a monitor underneath, fake blood, stabbing at a TV monitor with scissors, tin foil death masks – just a lot of craft store purchases during my days off on tour and then putting these new ideas into a song and shooting it live to video screens from above with a rostrum camera. The 3D film was mad too, I pretty much did everything that the stereographer warned me against doing and it turned out crazy in places, very Peter Gabriel. I love it most when artists trust me to do my thing, I feel their performance very deeply and put these emotions into the camera direction and vision mix.

Pearl Jam I had wanted to work with forever, or at least since the first time I saw them play live in San Francisco 1993. I had to wait until summer 2013 for that opportunity and it has been all I hoped for in terms of photography and how the band are as a group, as people. Their energy is highly infectious. 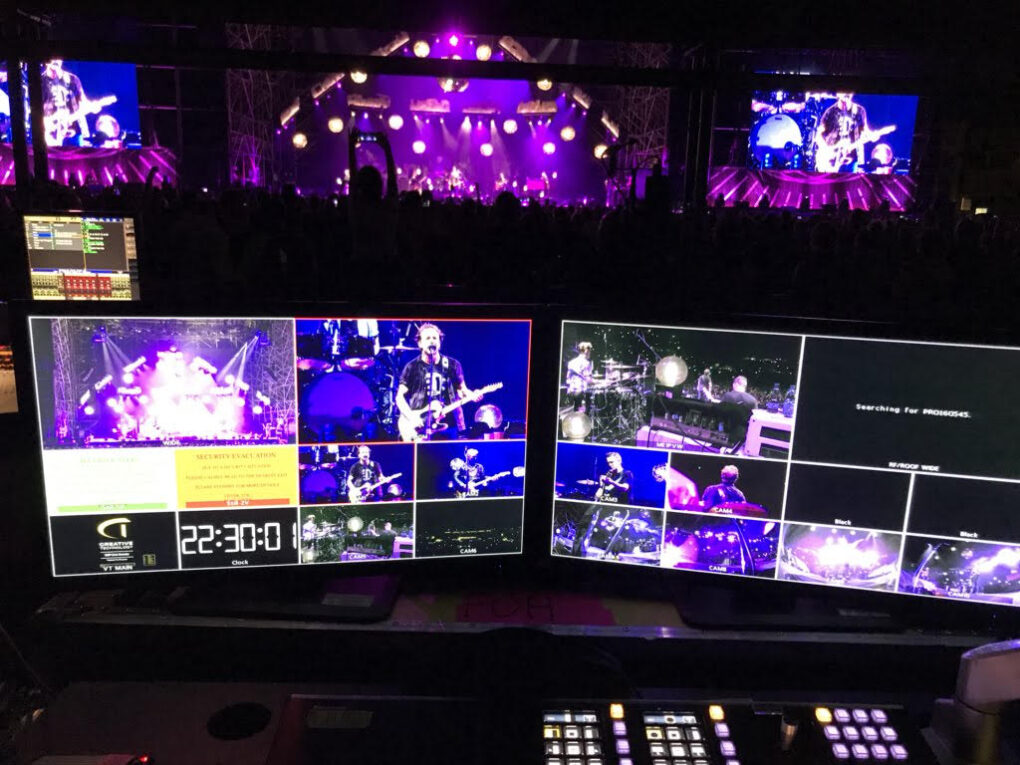 All of the bands I’ve worked for have thrilled me in different ways which is why I can’t stop touring and making live films, its intoxicatingly fun and adventurous. Snow Patrol were lovely too and trusted me to do my thing for them, their Live At Royal Albert Hall film I enjoyed making, I added a load of animated stuff in the edit, from a 15 minute animated film I’d previously made for a music video and for screens called The Lightning Strike. Great band and lovely people, very trusting and grateful.

You met Eddie Vedder through Michael Stipe, when R.E.M. were on tour with Accelerate. How was your first meet with him?

I saw Ed backstage at R.E.M. in Philly ’08, he looked like he was looking for the dressing rooms so I pointed him in the right direction. Took all my will power to stop myself from doing the Wayne’s World ‘We’re not worthy’ thing. I hung on after the show and Dick Adams (production manager) said he’d introduce me to Ed. I reintroduced myself from earlier and said I was the video guy, he was very flattering about the look on the screens that night and I offered my services to Pearl Jam, but I had to wait another five years for that to happen! Anyway needless to say it was a pleasure to have met him that evening.

You started collaborating with Pearl Jam in 2013, just before the band’s epic concert at Wrigley Field. What are your memories about that evening?

Well I had to keep pinching myself to make sure I was actually finally there doing a show for PJ for a start. I’d turned down about six months of touring with another group just so I could do that Wrigley show for PJ and it was worth every minute. I remember the storm, the show being postponed in the middle of the set, Big Pete making the announcement, the crowd being patient and hanging on for about two hours until the worst of the weather passed and the band came back onstage. City of Chicago being cool and letting the gig carry on into the early hours, I remember being utterly blown away by how connected the band and audience were. I remember being asked to join the crew and do the Lighting Bolt tour too…

You’ve been following Pearl Jam with your crew for the past few years, right up to their 2018 tour. Several concerts from that tour were webcast by Nugs. Is there one in particular you’d like Pearl Jam to publish?

Well really they’re all so good for different reasons because you never see two identical sets. I think generally for me the second night in one place tend to be a little sharper on the/my cut especially if I’ve not done a show in some weeks/months. I can see the difference but I’m ultra critical of my live cutting and how its shaded and textured. I’d like to see the perfectly cut live show but it’ll never happen because I haven’t done it yet and I’m still trying to find perfect, whatever that is…

For now, the two Seattle videos of 2018 have been published, the one in Philly in 2016 where the group played Ten front-to-back and the legendary concert at the Stadio Olimpico in Rome. These videos were all directed by you and mixed by Josh Evans. Did you work closely on these videos?

To be honest we don’t work that closely on these video screen line cuts before they go to Nugs. Picture-wise they’re a fait a complit, maybe a little editing by Kevin (Schuss, Pearl Jam’s archivist and videographer) at the shop. Josh (Evans, Gigaton’s producer) has I believe a longer workload with audio because the pictures are already largely edited as I did them on the night. Things like Virtual Ohana for Ed was a much more ‘built from the ground up’nkind of film so the audio process is a lot more collaborative.

Did Pearl Jam ask you for suggestions on which videos to post on Nugs or did they do it all their own way? Is there a particular PJ concert that you would like the group to decide to release?

No they do it all their own way, I chip in when asked for suggestions and advice if needed but they know what they want. What would I like them to release? Gosh, maybe all the tiny club gigs back in the early ’90’s? I Know Kevin archived a lot of those with one camera but that’s part of the charm, the format.

Do you have a particular anecdote from the Pearl Jam backstage? Did you also shoot behind the scenes of their concerts?

During most shows our stage manager, Mat will mess about with my onstage camera operator, Joe. Joe’s had his laces tied together, a 30Kg stage weight attached to his trousers with a carabiner, he’s been tied to a length of upright truss behind Boom’s area, tied to a drinks cooler. Mat is very good at this, he does it without Joe knowing until he he goes to reposition when I want a shot from another side of the stage then – twang! – and he has to untie himself. Sometimes it’s funny.

I don’t shoot backstage, no. Only from when they come onstage until they leave. Plus the occasional iPhone birthday message.

Which artist or group would you like to film?

Wow. That’s around now? I’d like to do a full on live concert shoot with QOTSA but in places and at times turn it upside down and inside out. Add animation, explore and examine each song, reflect this using all kinds of art and imagery, colours and shapes. Slipknot too. Post Malone, Rammstein, System Of A Down, L7, Arcade Fire, Stormzy, Vince Staples, NIN, My Morning Jacket, Radiohead, Jack White, Wayne Coyne… never ending list!

A fuckin’ great list, Blue. Thanks for this chat, we hope to see us soon under the stage!

A pleasure, thank you for having me. See you soon I hope.

Blue Leach is a video director. He is the winner of the 2009 TPI Video Director of the Year Award.

He has recently directed 2016/2018 Vault Shows for Pearl Jam. Other projects include R.E.M., directing the live album R.E.M. – Live, a live album from R.E.M., recorded at the Point Theatre, Dublin, on February 26 and 27, 2005, the closing nights of the winter European leg of the Around the World Tour in support of their thirteenth studio album Around the Sun released in late 2004.