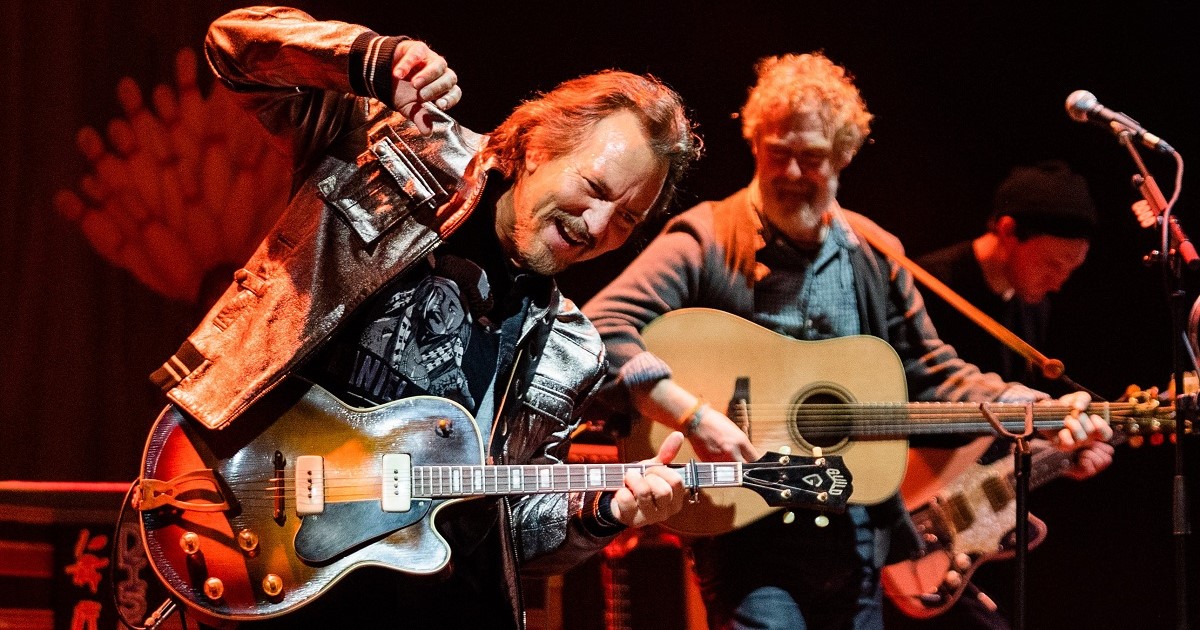 Eddie Vedder returns to The New Jersey PAC (Newark, NJ) for the first time since 2008 during his East Coast Into The Wild Solo Tour. I was very fortunate to have been there in 2008 for the magical night that included some major highlights for me as a concert goer but also as a Pearl Jam fan. Eddie was very talkative that night and midway through the show he said does anyone have any questions? and put a fan on the spot in the first few rows, asking him if he had a question to ask? When the fan didn’t reply there was awkward silence and a voice from the balcony screamed out in a joking yell, “Can you please tell us the lyrics to Yellow Ledbetter?”.

Everyone laughed in the crowd and I feel it caught Eddie a little by surprise and he immediately laughed too and quick wittily said, where’s Mike McCready when you need him… but he paused for a second and then began to explain the lyrics to us in a heartfelt way. If felt like you were sitting around the campfire or “out on the porch” with a friend… Eddie shared the lyrics and the intention of the words “Can You See Them Out On Porch…. Yeah, But They Don’t Wave” and what the inspiration was that shaped those lyrics. 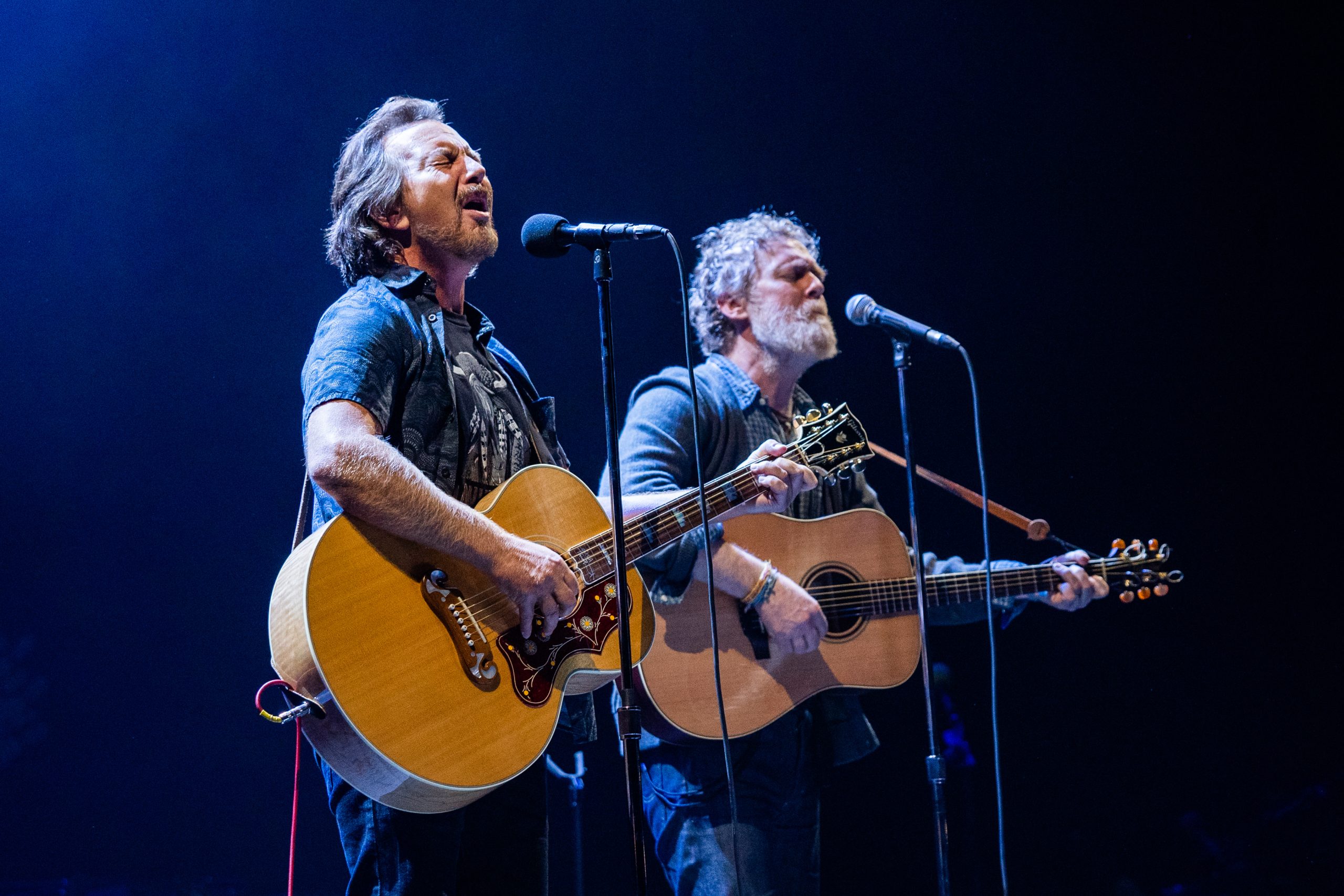 Then during the Encore for Hard Sun my friend Brian and I made our way up to the stage knowing the security would be a little relaxed for the last song. We were standing with about 20 people at the front of the stage when Eddie came right over to us, turned around and slowly leaned back, falling onto us. I couldn’t believe it, we were holding up Eddie Vedder as he was strumming and shredding the end of Hard Sun breaking strings playing his heart out; it was a magical experience. So this Sunday night show back at NJ PAC, had a high bar to live up to for me; as Eddie Vedder and The Earthlings make their NJ Debut in 2022!

Eddie Vedder and Glen Hansard took the stage from opposite sides, they both walked to the middle of the stage smiling and shook hands. Eddie then reached his hand out to the crowd just before each picking up their acoustic guitar and slowly walking up to the 2 mics that were set up on the stage in front of them; the show began with the Earthlings tour debut of Society. It was a perfect way to start off the evenings journey, switching it up from Drive which has been the previous shows opening song. 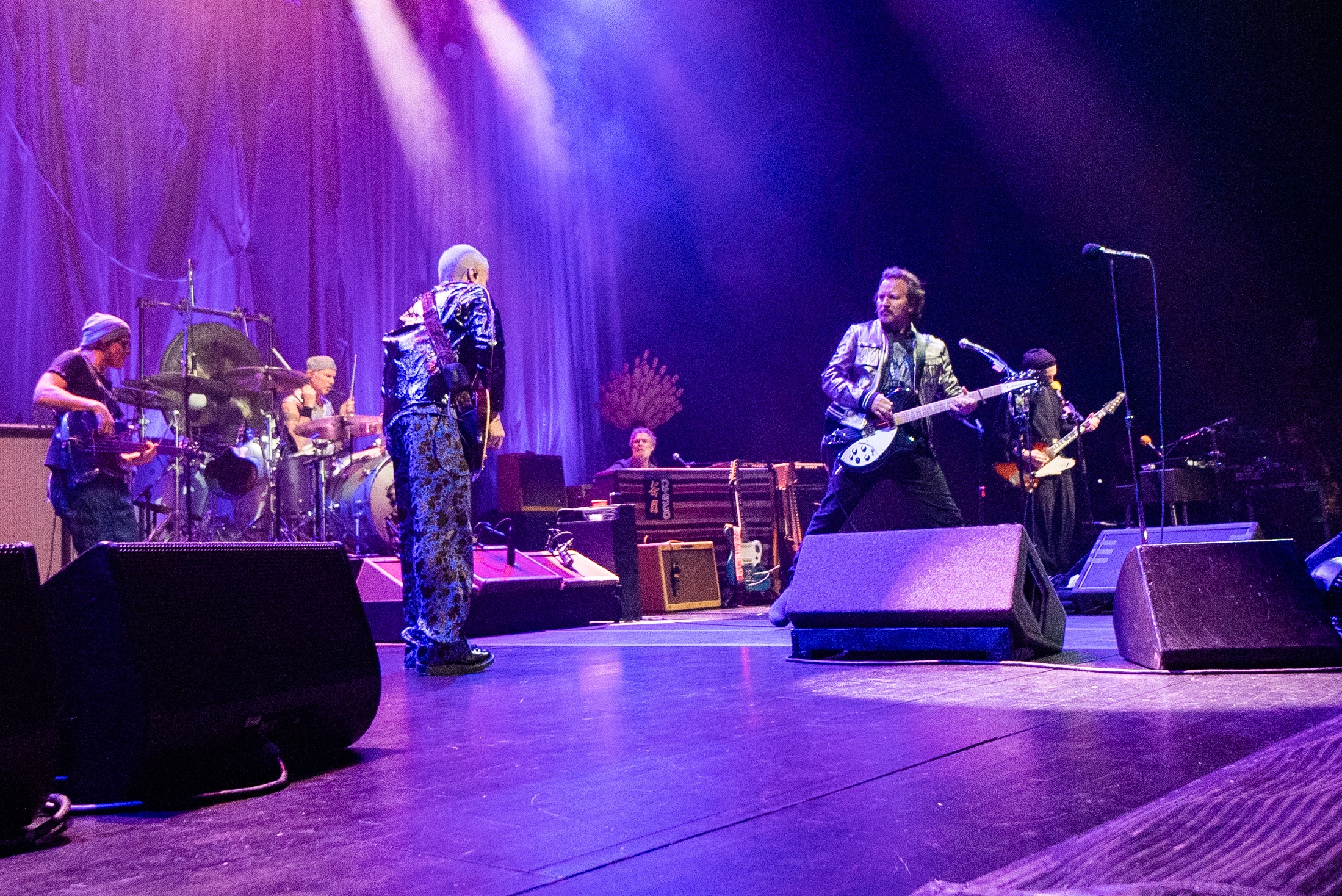 I had mentioned to a friend earlier in the day that I would love for Eddie to start to include some of the Into The Wild/Ukulele Songs on this tour and Eddie delivered in a cosmic way last night! Next Eddie Put on his Silver “Earthlings Vibe” Jacket and Simon brought out his Rickenbacker to play Room At The Top (A Tom Petty Cover) which appears to be a recurring cover on this tour, followed by Here Comes The Sun and Timeless Melody.

The evening was off to a wonderful start, and the SOLD OUT crowd was loving every minute of it – Many of the fans/people I spoke with were saying this was their first major concert/live music experience in few months; even more than a year for one person due to the Pandemic! So, it was very appropriate for them to play I’ll Be Waiting a new song off the Flag Day Soundtrack and then Invincible the first song of the evening off Eddie’s new album Earthling, set to be released on February 11th via Seattle Surf/Republic Records. 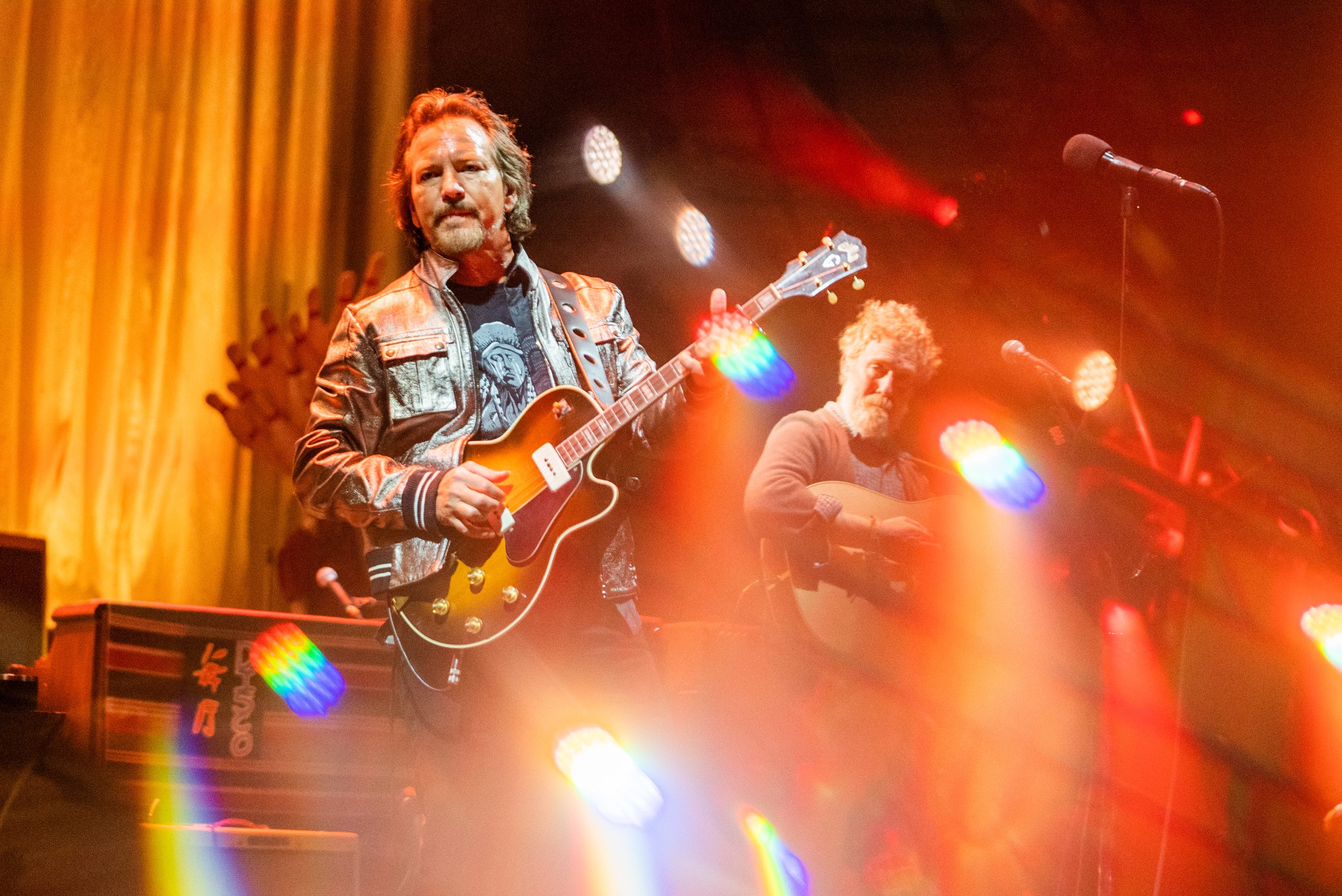 Eddie talked to the crowd a few times throughout the show but the most heartfelt words were before he performed Brother The Cloud. Tonight he talked a little about his experience with loss due to suicide and how the song is about several people who deeply touched his life and who he wished would have just reached out to him vs taking their life; but that he lost a friend named Jeremy Richman to suicide in the last few years, and though this song isn’t about him… that he would be thinking of him tonight when he sings it, as he was reminded of Jeremy today. Eddie always has some words during a show that bring a tear to my eyes, this was the moment last night.

Hearing the new songs performed live for the first time is an experience that I always look forward to. I usually leave the show enjoying at least one song much more then I previously did, now that I saw and experienced it live. Tender Mercies is that song for me on this tour, it really moved me last night and I found myself singing it on my drive home. It’s unassuming with Glen starting the song on the keys, but then the drums and Eddie starts singing on the second verse with his iconic deeper voice (reminiscence of Hunger Strike) vocally responding to Glen and it continues into the chorus, this performance from Eddie and Glen was for sure a highlight of the evening.

There was also this fedora wearing Photographer who wandered on stage taking photographs midway through the show that Eddie noticed and addressed him in front of the crowd… saying that “The stage was for Musicians only”! It was Photographer Danny Clinch; and Danny put down his infamous Leica Camera and pulled a Harmonica out of his pocket…. as Chad Smith counted them off leading them into Try, a upbeat song on the new album featuring Stevie Wonder (Hey Danny, you just sat in for Stevie Wonder)! A fan somehow walked onto the stage during this song and security kindly guided them off and away from the band as Danny just sidestepped them not missing a beat. Eddies face after this moment was pretty priceless. Danny Clinch crushed it on the harp too, I’m pretty sure he’s an official Earthing now! Watch Video Via BossandNetsFan. 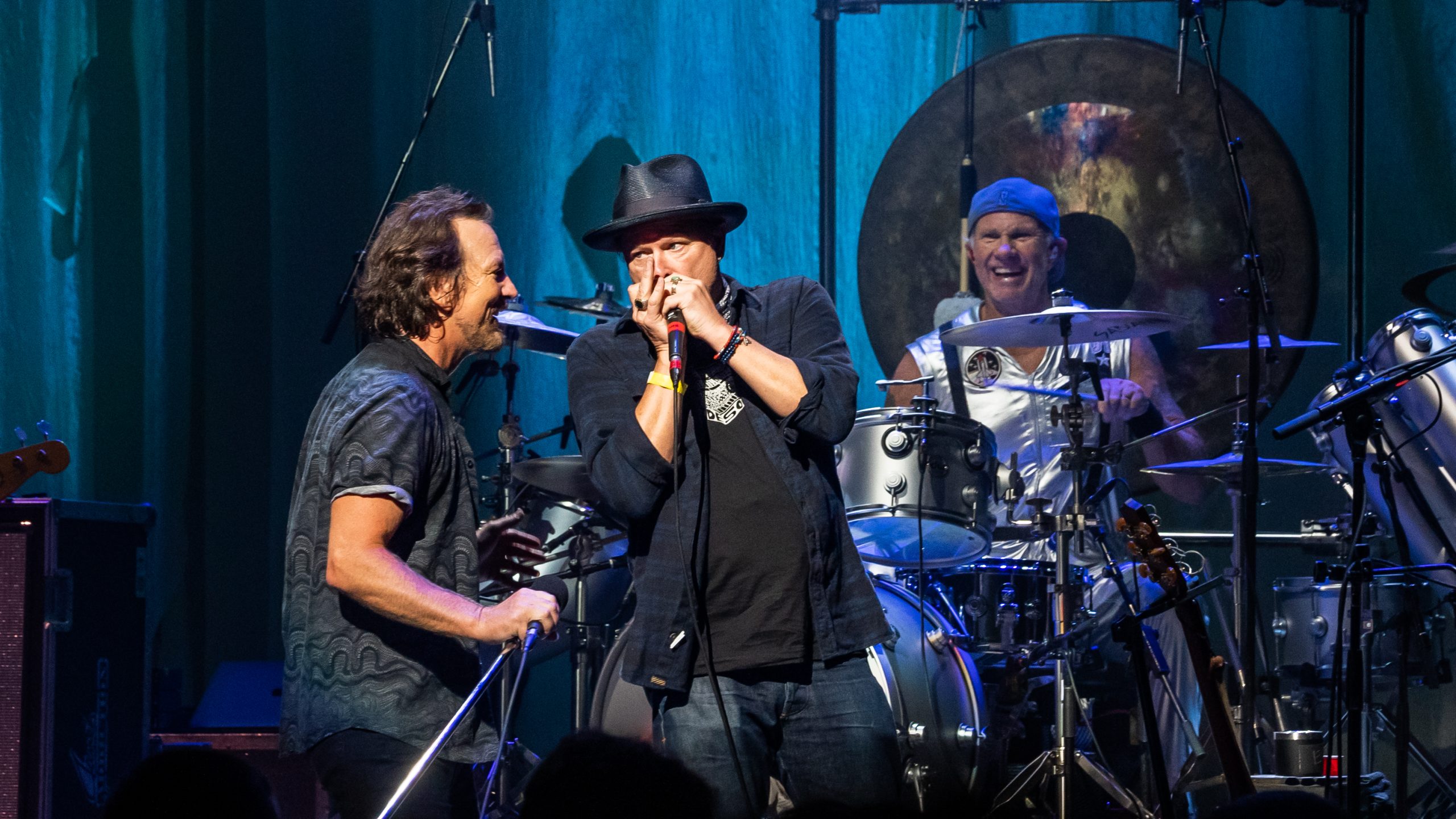 Chad Smith had an awesome drum solo where he got funky and really showcased his talents as a drummer/performer, easily launching drumsticks out into the crowd without missing a beat throughout the night. It was really enjoyable to watch Chad’s playing style in a Silver Space Jumpsuit on the drum kit, as we’re not used to seeing a drummer like that on an EV solo tour!

The set ended with a Full Band version of Hard Sun; Eddie brought out his famous Olympic White Fender Stratocaster for it and the circle light in the ceiling of the venue started to drop down as a metaphorical sun! It was the perfect way to close out the set and rallied those who still might have been sitting in the crowd, to their feet. Thinking back there was a beautiful metaphor of playing Here Comes The Sun in the beginning of the set and ending the set with Hard Sun! Though it was a seated theater, everyone in the Orchestra and around me pretty much stood the whole night singing their hearts out! 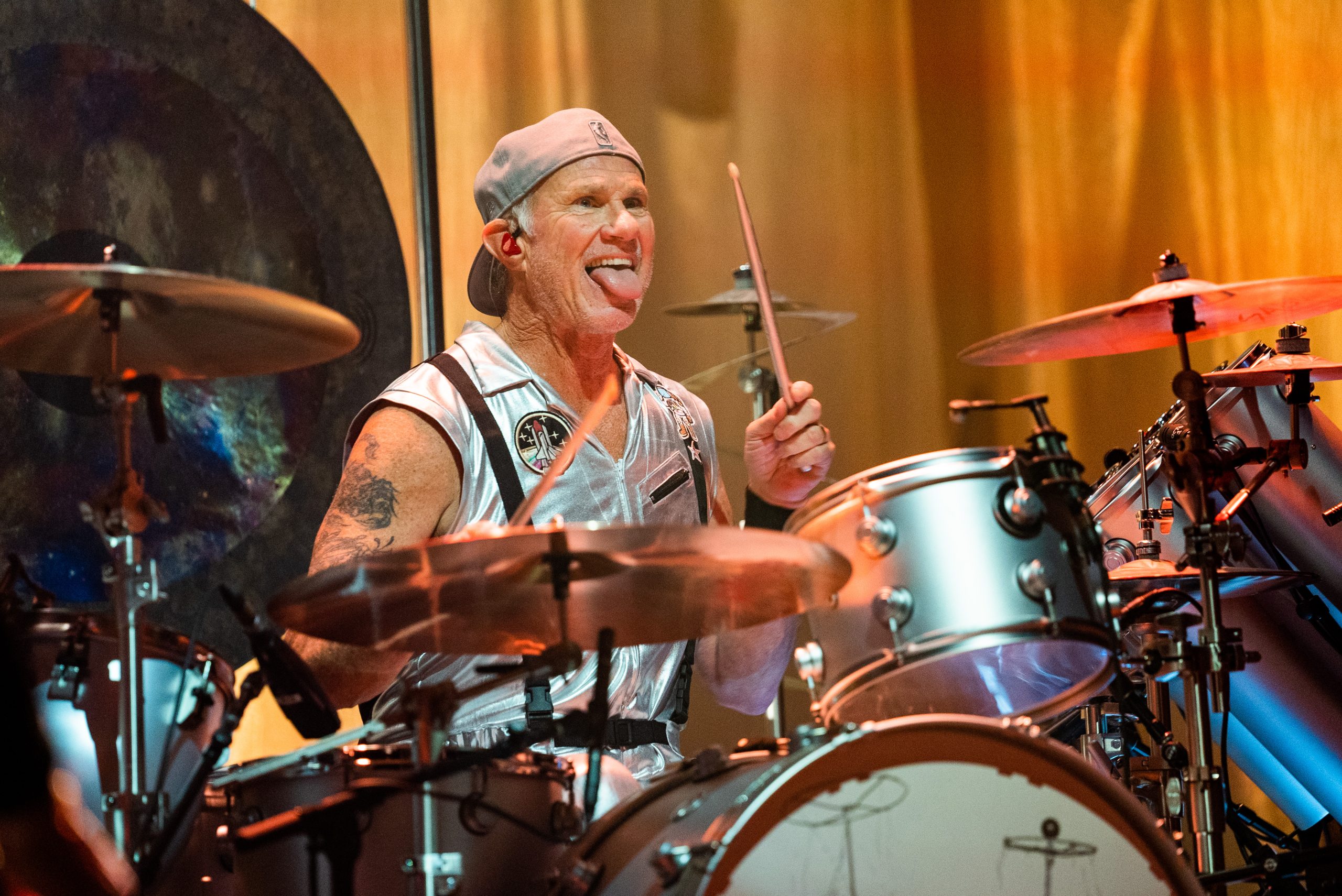 Being in New Jersey (Land Of Bruce Springsteen) Eddie teased that he was hanging with his friend Bruce on his day off and also mentioned how good it was to be back in New Jersey after having an amazing time in Asbury Park, during Sea Hear Now (September 2021)! We all thought he was going to play a Bruce song or that Bruce might come out, but instead he switched it up and played another New Jersey Legend and E Street Band Members Song, Little Steven’s (Steven Van Zant) I Am A Patriot. They played the punk rock fast version and was a fun sing along for us Pearl Jam/Little Steven fans!

Similar to the previous Eddie Vedder Solo tours, throughout the evening a few Pearl Jam songs have been sprinkled in the Set List mix this tour. Eddie gifted NJ Wishlist, Porch, and then a full version of the 10 Club favorite but very rarely played song Dirty Frank during the encore! This was my first time ever hearing Dirty Frank live in it’s entirety in my 25+ Years of going to shows. #bucketlistcheck 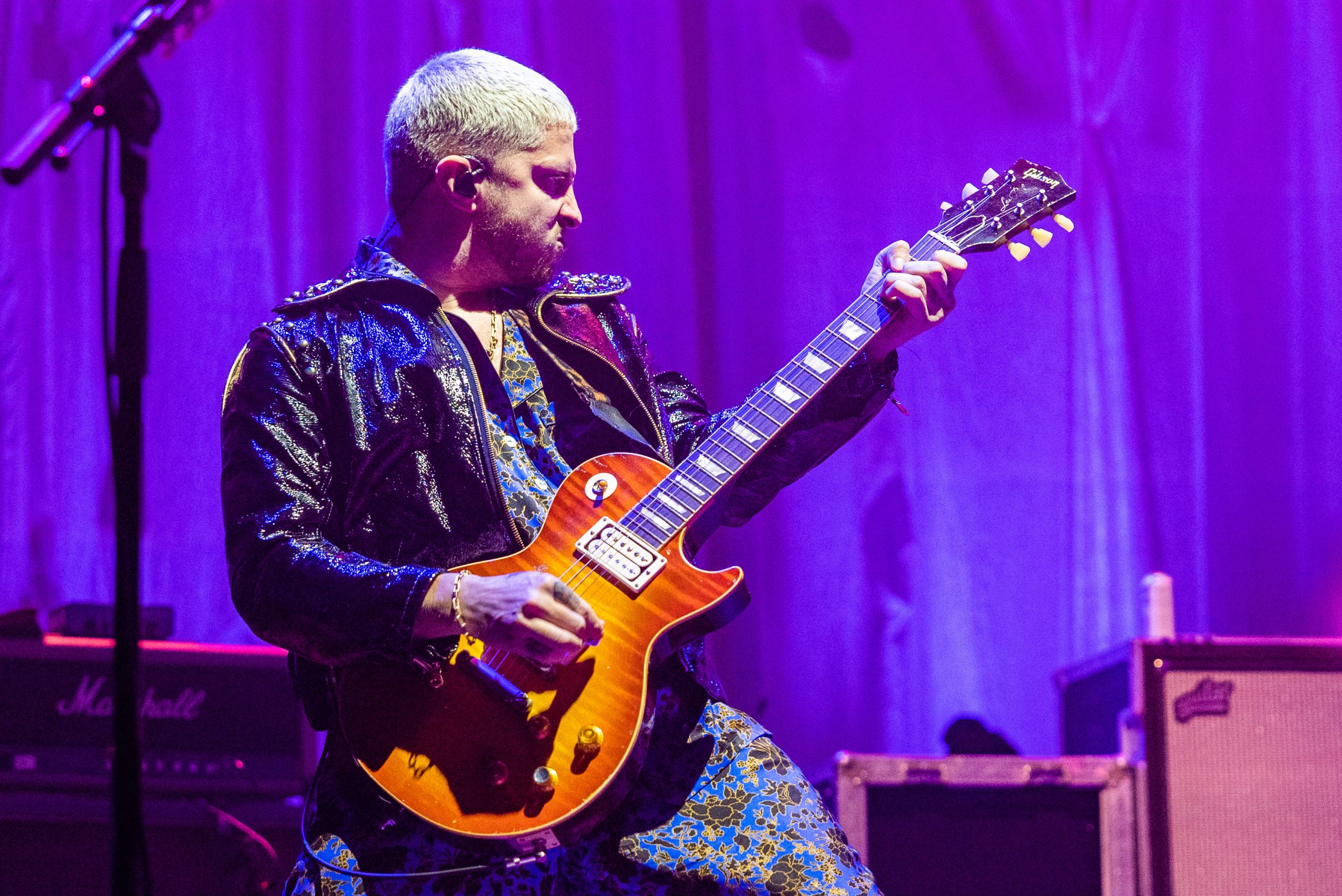 The Earthlings closed out the evening with A George Harrison cover of Isn’t It A Pity and then a rocking full band version of Porch! Due to covid precautions almost everyone was wearing a masks, but at this moment you could still feel the vibe that everyone in the room was singing along “Hear My Name, Take A Good Look…. This Could Be The Day – Hold My Hand, Walk Beside Me I Just Need To Sayyyyyyyyyy!”. Josh Klinghoffer and Andrew Watt both had impressive stage presence/performance and you could tell Andrew has been very much inspired by Mike McCready’s guitar playing and soloing during Porch and was having a blast being an Earthling. Josh provided a master class on how play guitar, keys, and backing vocals, sometimes all at the same time! Chris Chaney was rocking out too in the back of the stage holding down the low end! Such a talented group of gentlemen on the stage. 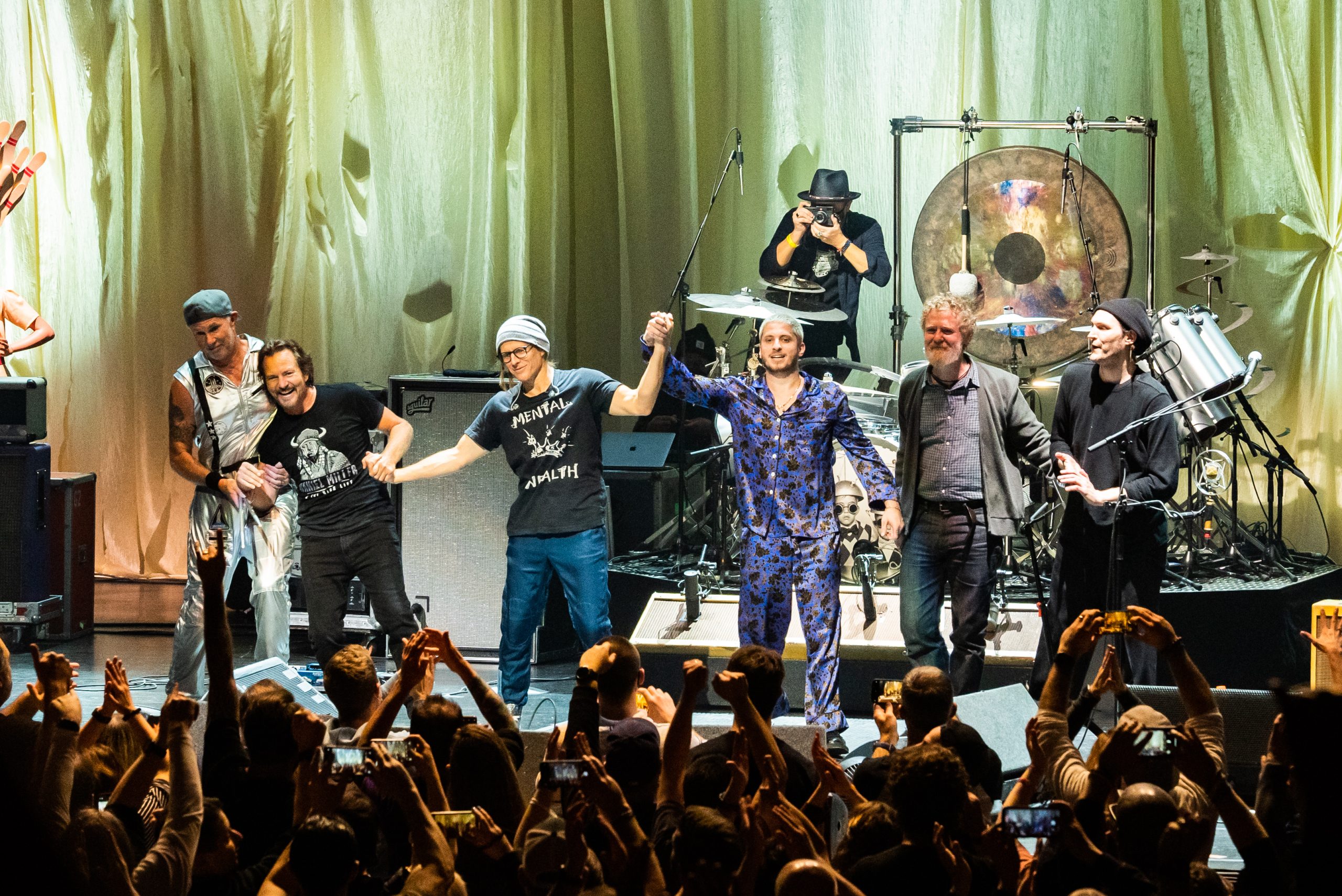 You can still get tickets for the limited Eddie Vedder and The Earthlings upcoming US tour dates here pearljam.com/tour – Next stop on the Earthlings Tour is Chicago, IL on 2/9/22. 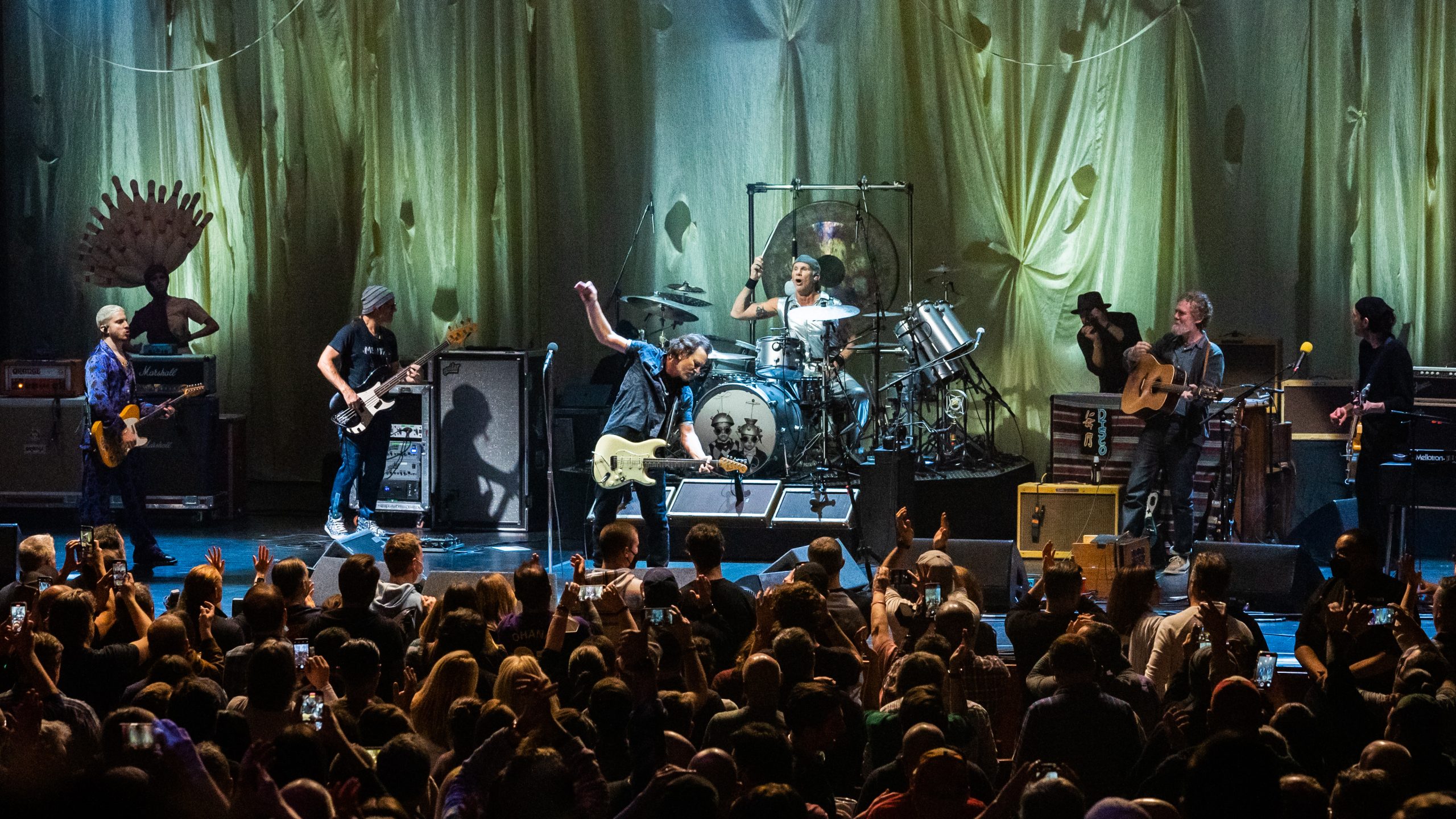 Glen Hansard opened the evening with When You’re Minds Made Up playing an amazing 5 song set with songs spanning his musical career. Glen’s performance is truly a special experience, if you’re reading this and haven’t seen him perform live, put it on your TO DO list! Glen closed his set with his song This Gift Inviting the crowd to sing along with him teaching us the lyrics If You’re Strong Enough, And You Don’t Give Up it was beautiful. Then ending the song with a signature Glen 1000% passionate strumming performance, playing his guitar so hard/fast the strings all broke or popped off his guitar! 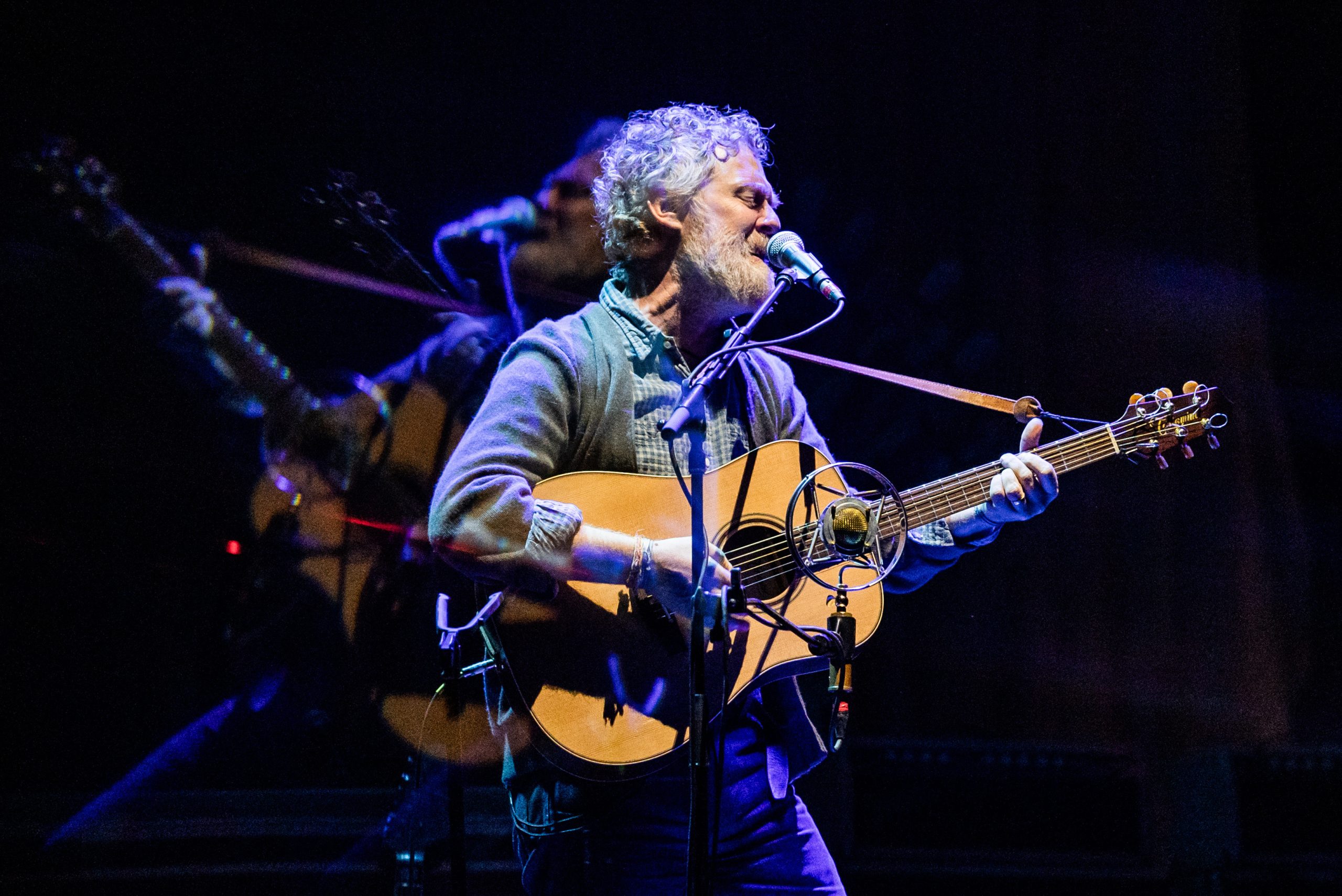 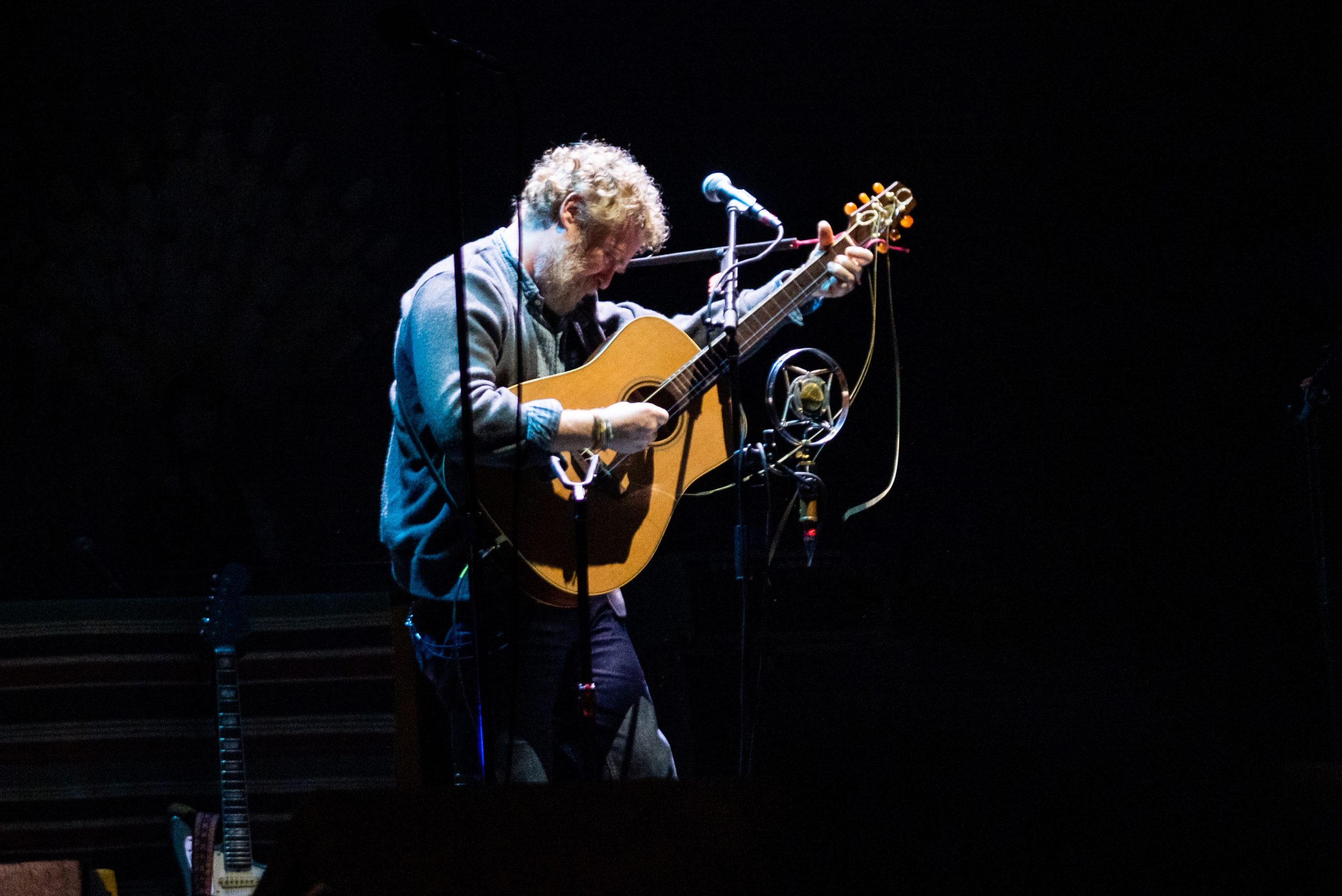