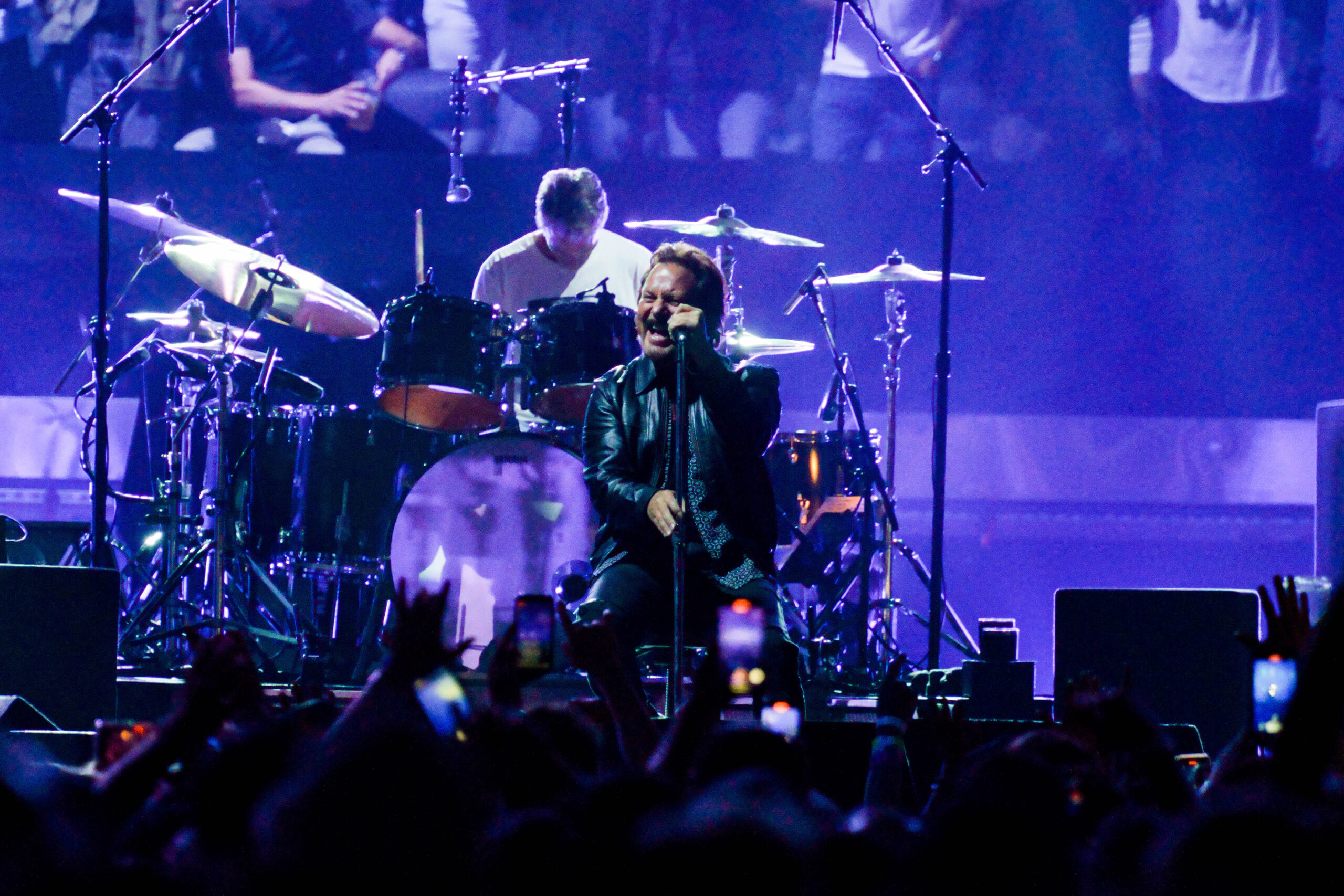 “I’ll Ride The Wave Where It Takes Me….”

I put two rings on my left hand Sunday night before leaving to drive to Madison Square Garden (New York City), these were my mom’s rings that she wore every day (one being my Grandmother’s wedding band). I wanted to have my mom with me Sunday night as it was my first time officially photographing at Madison Square Garden and it was important for me to have her and my grandmother’s energy were with me – as we had a deep bond over Pearl Jam and Live Music.

This was a really tough year for me as well as many other close friends who lost loved ones and/or are in need of some musical healing… It’s also 9/11, a heartbreaking day of loss for America and New York City. I know that my heart along with many other hearts in The Garden Sunday night really needed to hear the song Release in a major way (The poetic and emotionally touching last track off their first album, TEN). 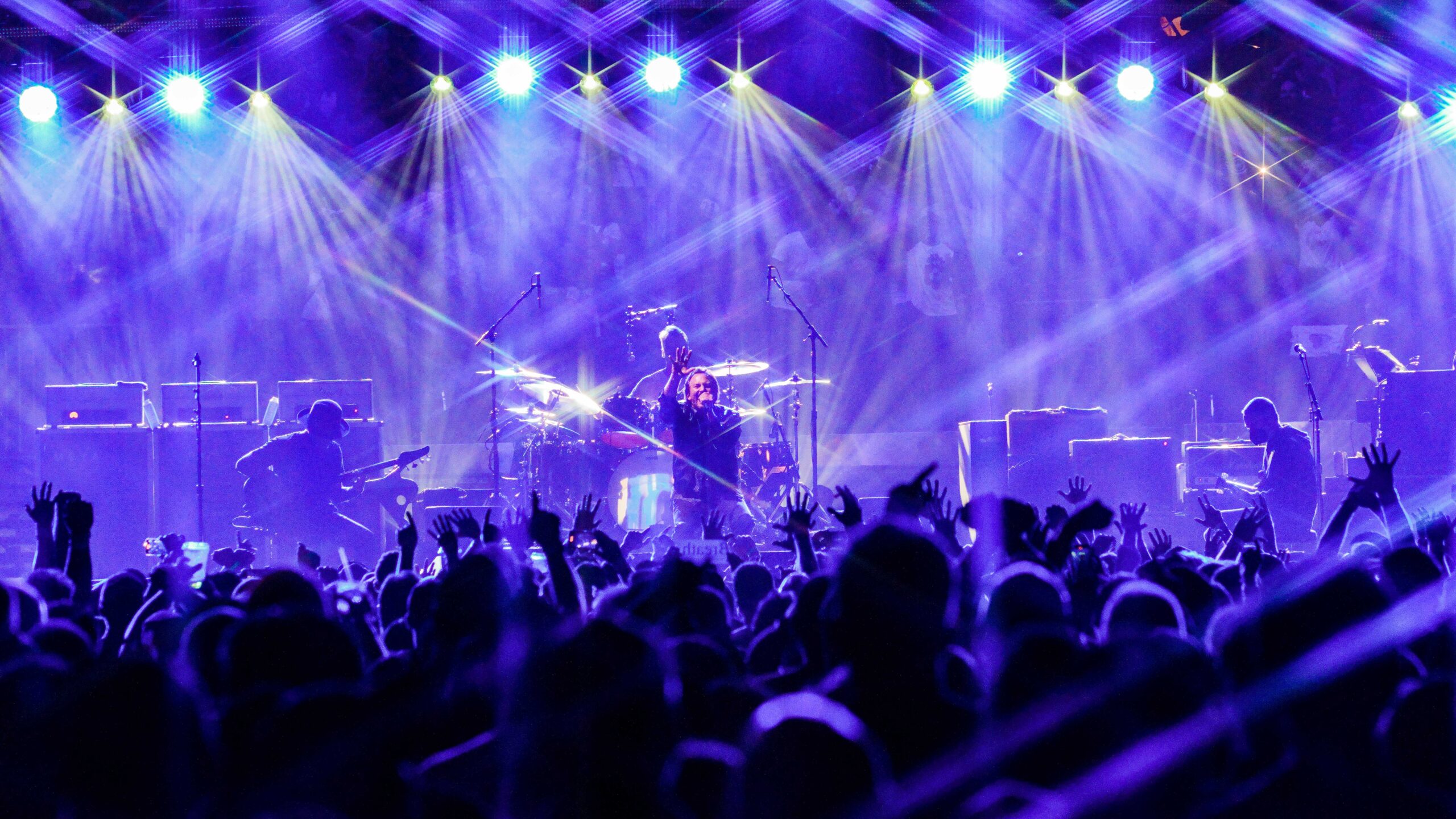 Pearl Jam took the dimly blue lit stage shortly after 9pm, they sat down on stools that were patiently waiting for them on the stage. Ed sat down last, and as he did, those first “D” chord notes began to ring – My prayers were answered, New York City and I were gifted Release as the opener. Having just lost my mom in July to Cancer, this was a very emotional moment for me and is one of the few times I’ve been photographing with tears running down my face, it was impossible to not be emotional after everything I’ve been through, we’ve been through, us fans have all been through, the first responders and frontline workers have been through, and the journey the band and their crew has been through to get to this moment of healing tonight in NYC on 9/11.

I felt Release deep in my soul Sunday night, I took a moment and kissed my moms rings on my pinky finger as Eddie was singing, and I had a flashback to being 18 Years old on September 11th 1998; not having a ticket to the Pearl Jam show that night and borrowing my mom’s new car to drive to The Garden with 2 friends on whim. Trying to find tickets that we could afford and somehow that night we were successful, even making our way inside to all sit together! That was the infamous Breath show where they finally played it (for the 1st time in 5 years) after everyone was holding up Breath signs at all the NJ/NY Shows. This was an important PJ educational moment for me, this was the night I learned that you never miss the night 2 show, especially when it’s at The Garden! 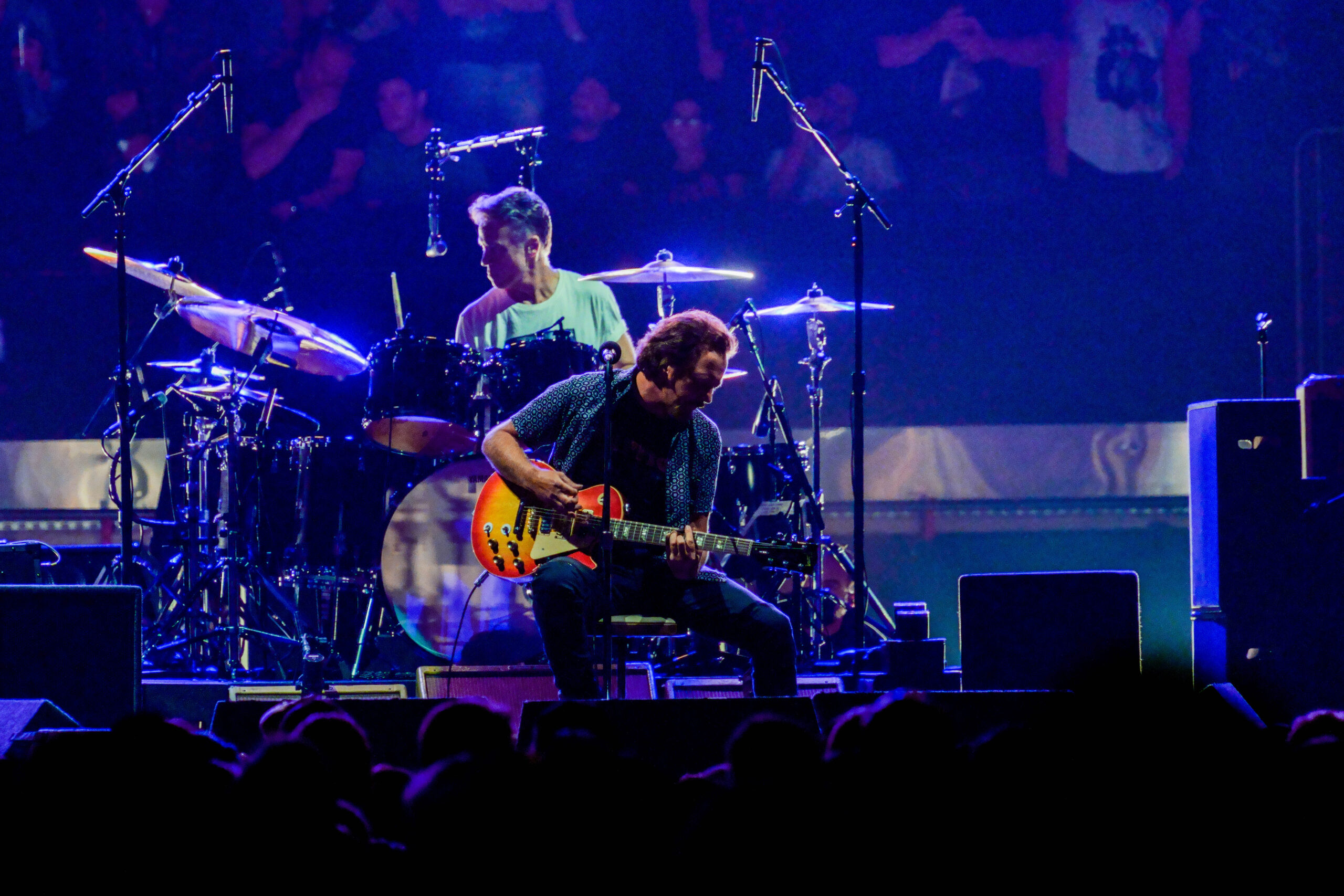 Release transitioned into a really amazing version of Garden, Ed was singing and playing so passionately on these first few songs that he seemed to almost rise from his seat at times. Ed then dedicated Come Back to all the First Responders who made it out tonight) and Mike McCready leads the band into an AMAZING version of Present Tense echoing the vibes of the last time I heard this song which was on the beach in Asbury Park, NJ (September 2021)!

One by one, the members of Pearl Jam started standing up and as the chairs were removed Mike and Jeff, and Stone started to all move and jump around on the stage. As the song goes into the bridge, Ed finally Stands up and Pearl Jam delivers a Garden shaking Present Tense jam that really set the tone for the evening and a high bar for the rest of the night! 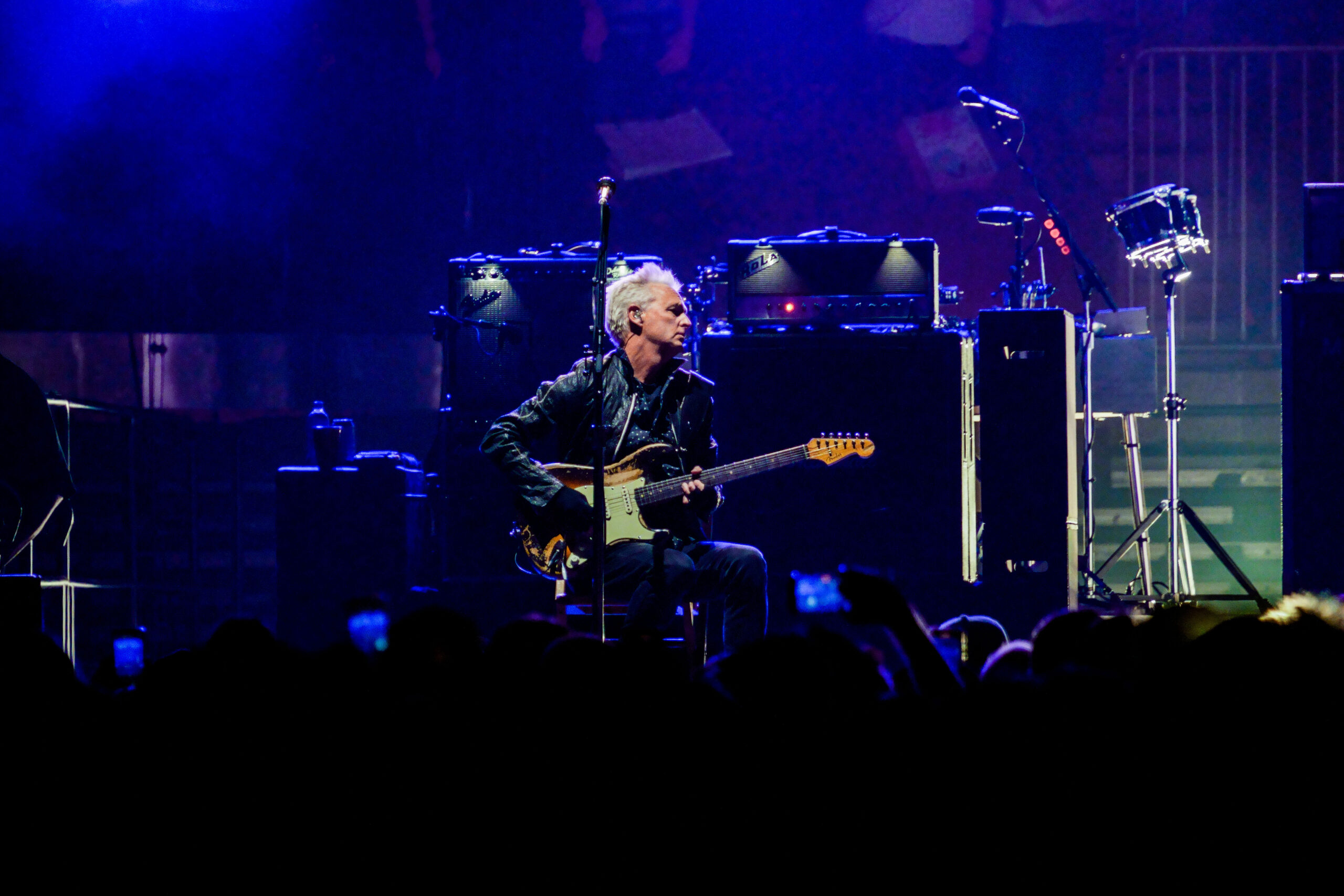 The setlist for 9/11/22 was pretty Epic and segwayed through many of their records (though they did not play any songs off Backspacer, Lightning Bolt or Riot Act). The band was on fire, Mike was jumping around as well as Jeff and Ed, Jeff was even getting super low in his stance throughout the night. It really was a dream setlist and their energy matched the crowds amazing vibes of the Sold Out Madison Square Garden show!

8 songs into the set we get our first new song Who Ever Said, I really love this rocking track and it’s quickly becoming a new favorite of mine along with Quick Escape (Not Played in NYC) and Dance Of The Clairvoyants, it’s really cool to watch Matt Cameron’s drumming & rhythm on this tune and he and Josh Klinghoffer playing together, it’s such a full rounded out drum sound. 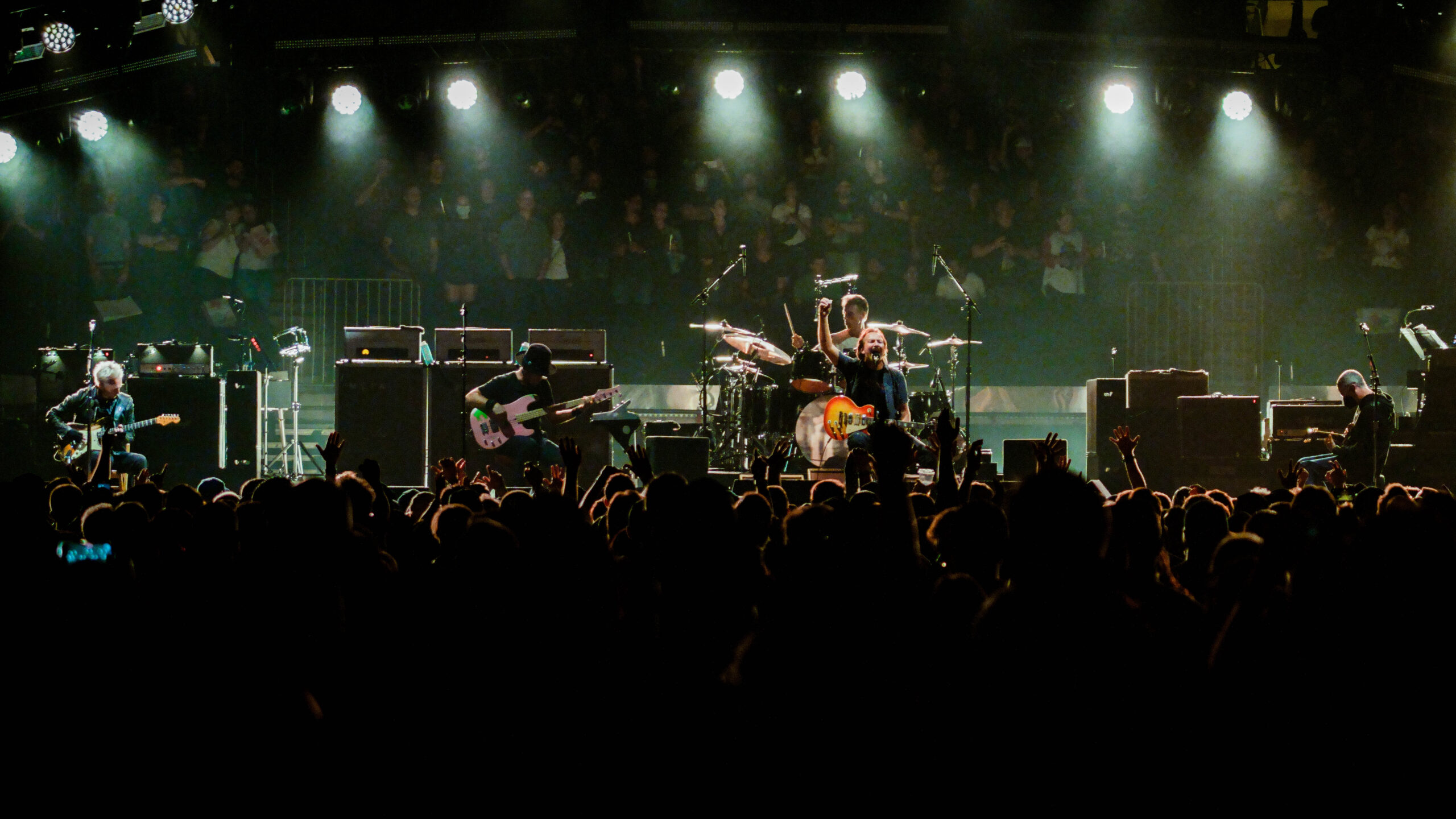 Ed was so animated all night, jumping, getting low, swinging the mic stand around, throwing tambourines out into the crowd, running laps around the stage during McCready’s Solo in Rockin’ In The Free World and then even doing some push ups at the end of the night! There was a really great moment during Better Man when Ed was jamming with Mike and turned around going back to back, leaning way back on him, he was super low and it was a classic moment from the 1st set! 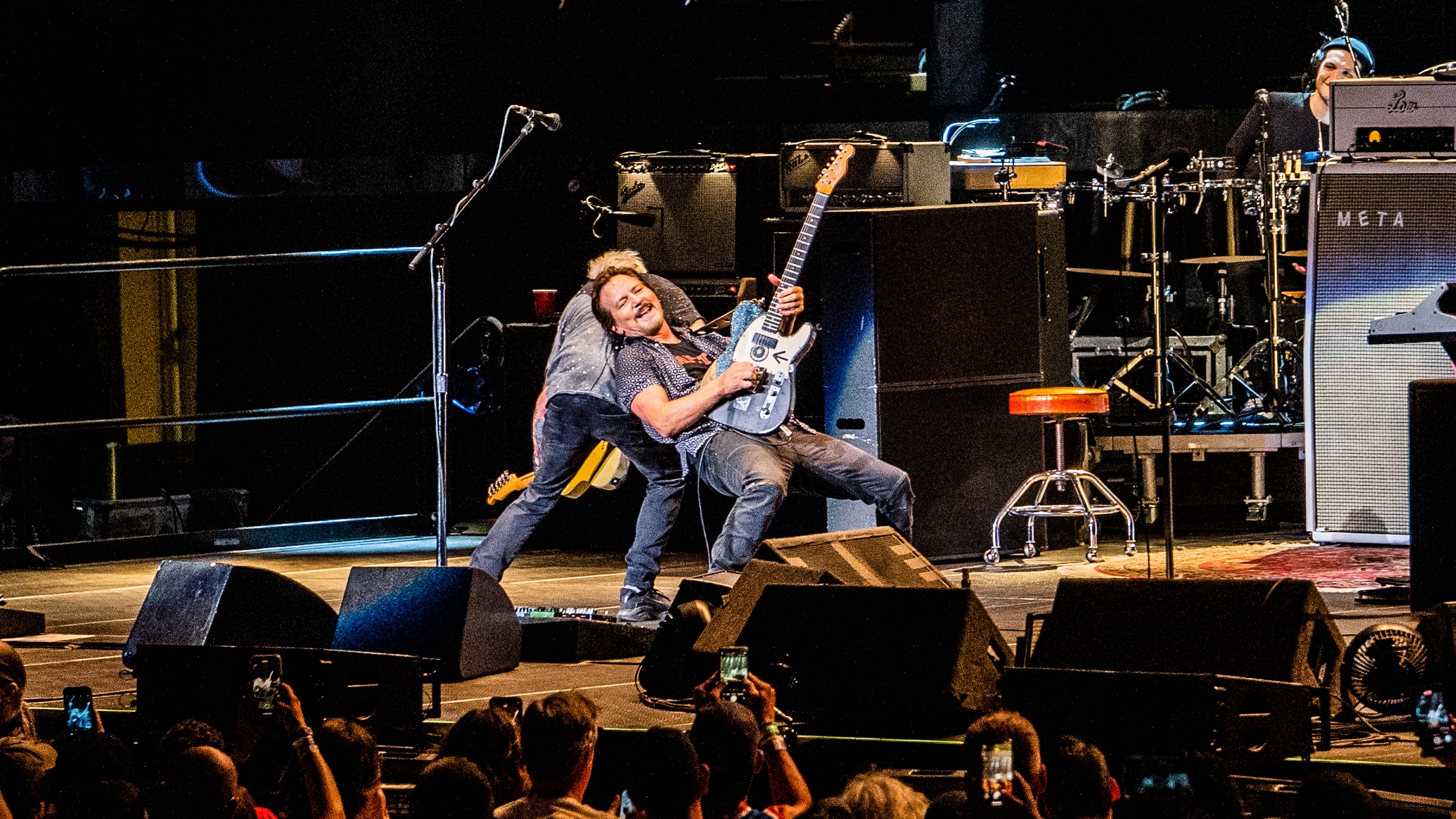 Another highlight of the night was Ed singing the chorus of Elton John’s Tiny Dancer briefly before leading the band into Chloe Dancer/Crown Of Thorns an epic Mother Love Bone cover that is such a special experience to hear live in The Garden. Ed sounded like Andy Wood at times and it really took me back to my high school/college days listening to the Singles soundtrack with friends. The first set closed out in a big way with a rippin’ version of Sonic Reducer (Dead Boys Cover) where Ed was flipping the mic stand around like a bō staff, leading into version of Rearviewmirror that had the entire Garden on their feet and that really helped me “see things clearer”! 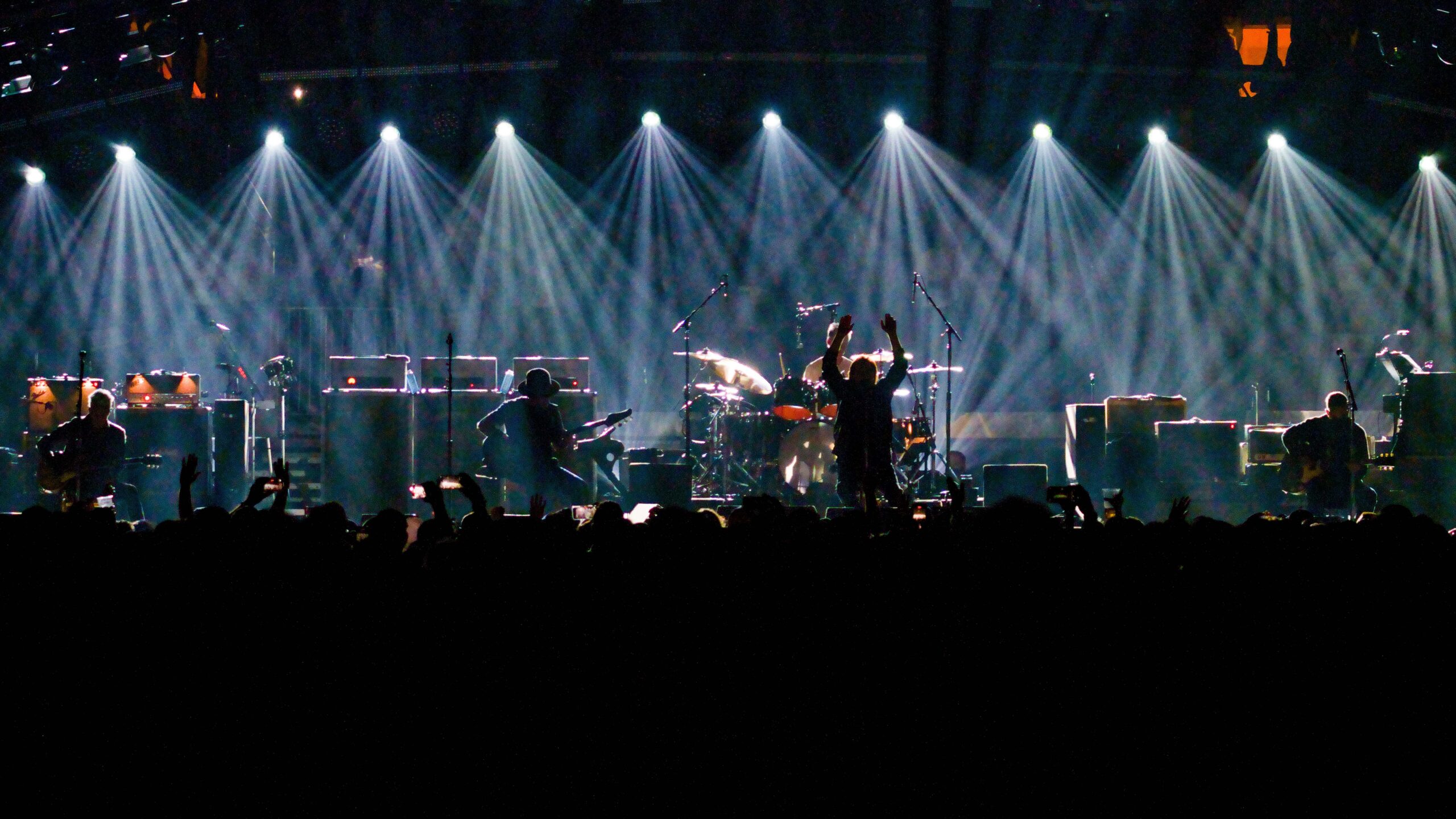 As the band takes the stage for the Encore, they are now set up on the back of the stage facing the opposite direction for a song. With the entire Garden being sold out, Eddie thanked everyone again for coming out and then they played Elderly Woman Behind the Counter in a Small Town for the back of the house. The band always makes sure to do something special for their fans at the NYC Sold Out shows, it really goes to show how appreciative they are and how important it is for them to make everyone feel like they are a part of the show experience!

Ed returns to the front of the stage to thank the crowd again and tells us how they added and played a 4th show in Canada “to have extra funds to pay for the fine of going over the curfew when we got to Madison Square Garden!” Jeff breaks out his 12 string Hamer bass for a thumping version of Why Go, it was so rockin I felt the Garden shaking again during the chorus.

The encore also showcased a duet of Purple Rain with Ed & Josh Klinghoffer – where Ed was wearing an amazing sparkling jacket left behind by Harry Styles, I know Prince would have approved of both the jacket and their cover!! It was awesome to see Josh come out and sing/play with them on this one, he’s been a great addition to this tour and the touring band, his backing vocals/instrument work really add such a great sound element! 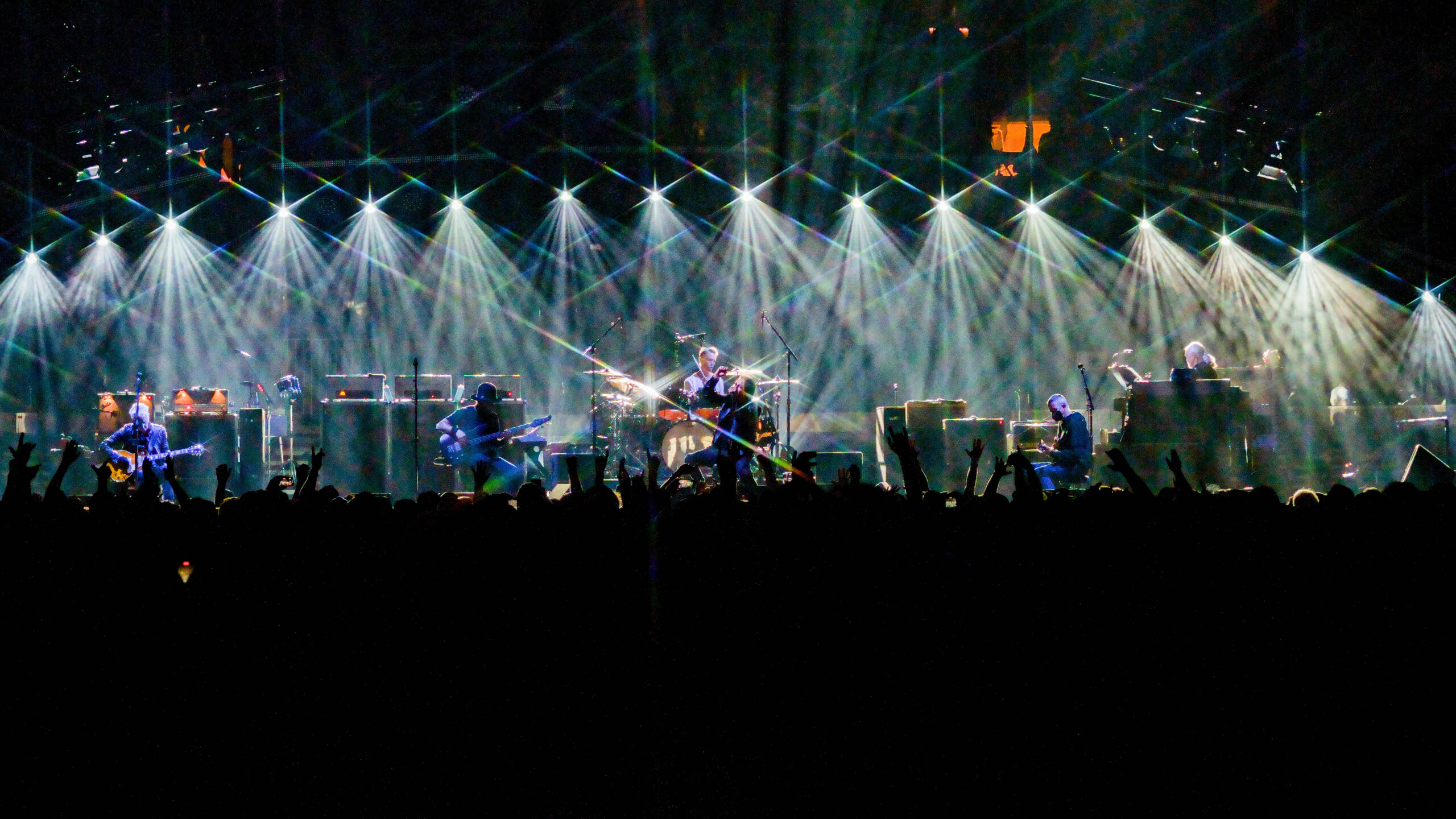 The night closes out in a BIG way with Alive and the ENTIRE garden singing “Ohhhhhhh…. I’m Still Alive” and after jumping at the end of the song, Ed hit the deck and started to do push ups, looking up and smiling at the crowd before getting up to kick the mic stand up with his foot, so he could sing Rockin’ In The Free World. Mike ran across the stage and pulled up Chad Smith (Drummer Of Red Hot Chili Peppers & Earthlings) to play Josh’s drum kit for this EPIC closing jam!

Ed thanked all the first responders again at the end of Rockin’ In The Free World and then Mike McCready took over as he performed The Star-Spangled Banner to end the night! It was the perfect closing to this very special 9/11 Pearl Jam show, I feel so fortunate to have been there to experience it! Thank you to my amazing friend Melissa who sold me her ticket so I could see this show, I greatly appreciate you! 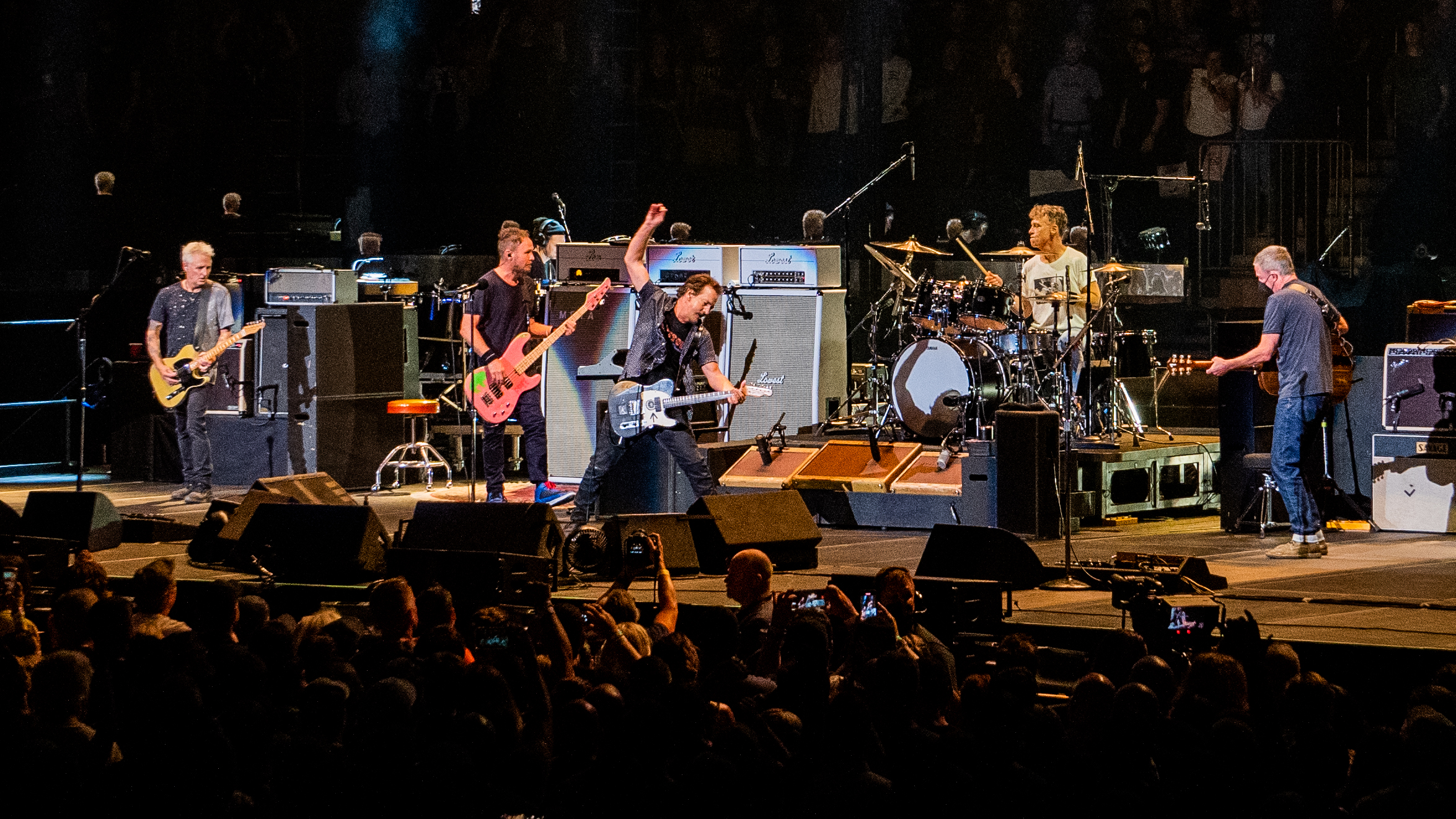 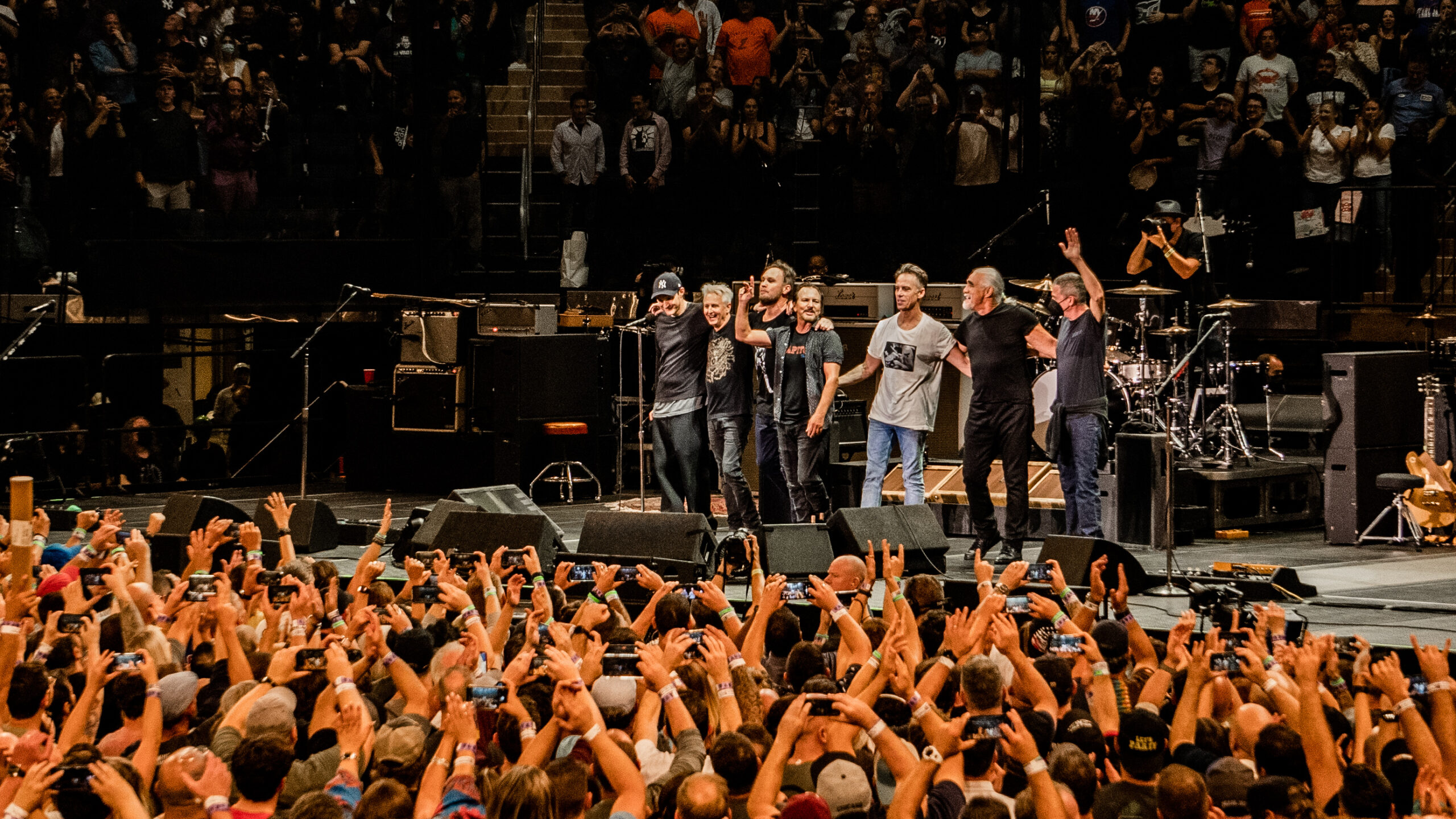