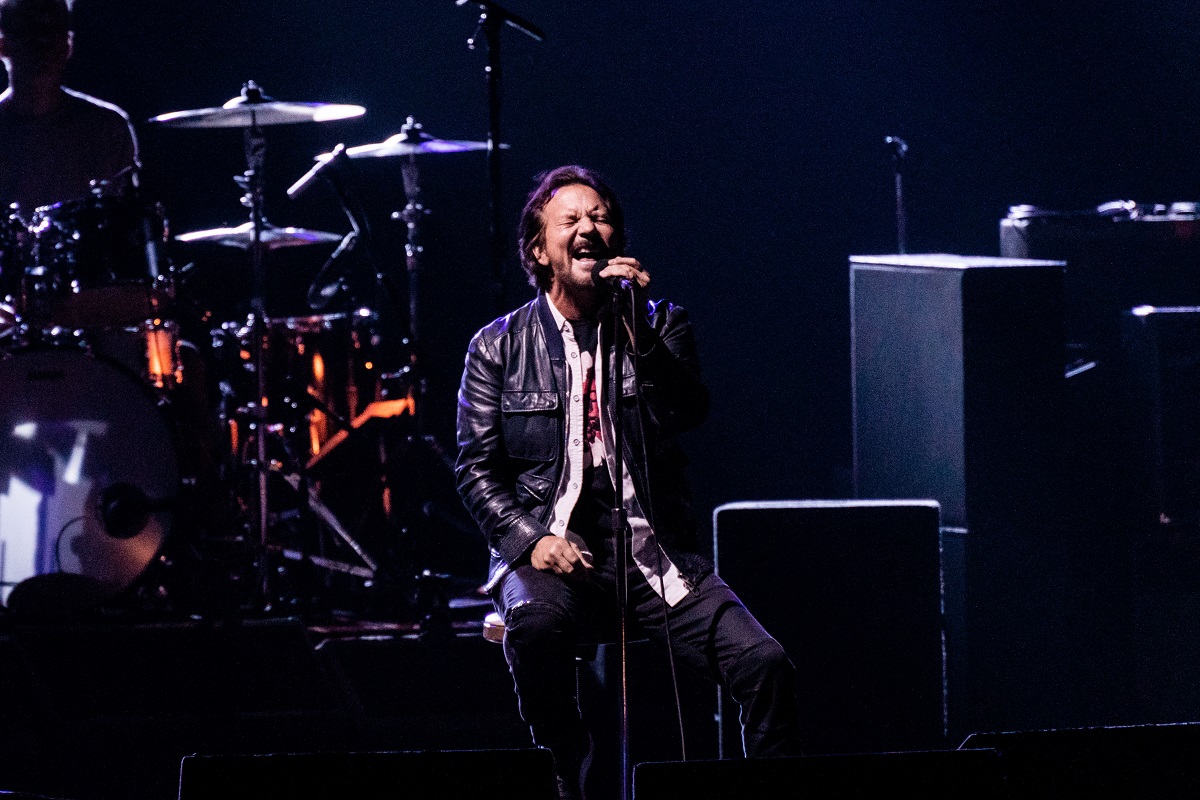 Once again Pearl Jam took the dimly blue lit stage with stools patiently waiting for them – Ed donning a black leather jacket and a white button down shirt, unbuttoned, exposing a Black Pumas T-shirt underneath. The first notes of Wash were played on the guitar as Ed looked towards Mike McCready slowly snapping the count and then turned left towards Stone Gossard, as he eased into the first lyrics “Ohh Pleaseeeee Let It Rain Today… This City So Fithly Like My Mind In Ways…” – I immediately knew it was going to be a special night in Camden, NJ.

Tonight is September 14th and would have been my Dad’s 72nd Birthday, my dad was my best friend and he taught me how to use a camera and he spent countless hours listening to music with me, exposing me to live music, and creating art/photographs with me. I really felt he was with me this night (along with my Mom who’s rings I was still wearing) and had to do with some of the special song selections that were made by the band… Like Given To Fly, Oceans, Hard To Imagine, State Of Love And Trust, Breath, and Alive it really makes you think about how the great beyond is still so connected with the energy of this world. 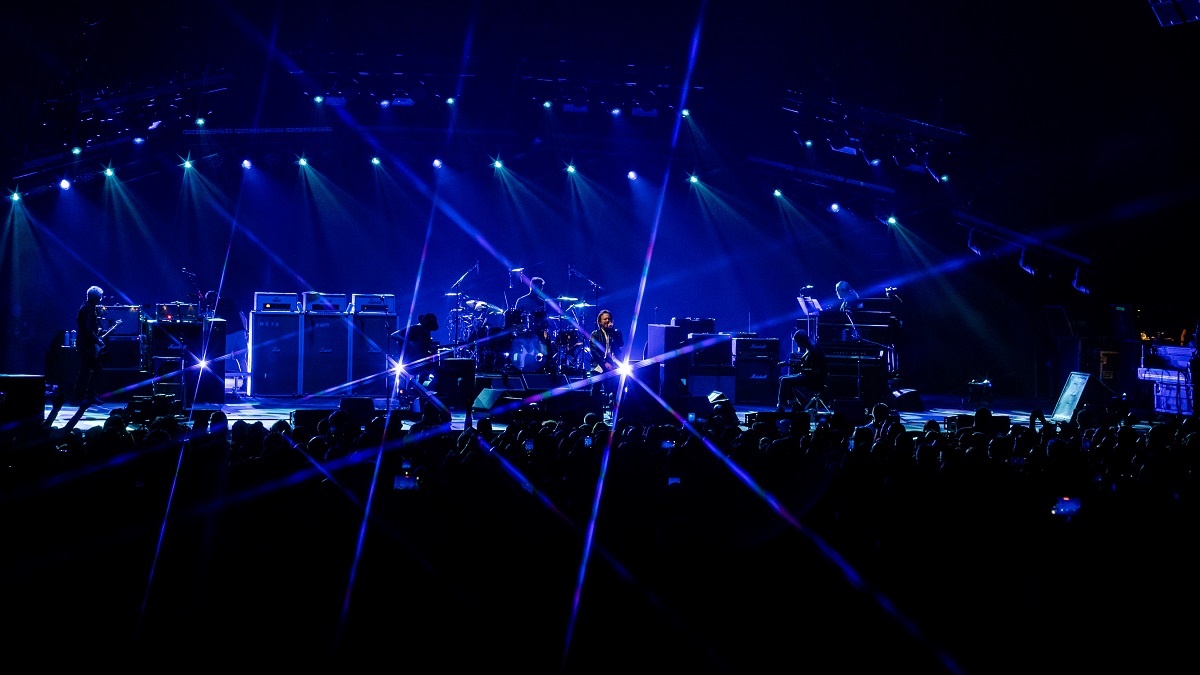 We found ourselves in Camden, NJ for this Wednesday night Pearl Jam show, With it’s location being in South New Jersey, very close to Philadelphia) Ed Joked early in the set… “Do I Say?… good evening jersey, good evening philly….where the fuck are we?… Good Evening Camden!” and then throughout the night about the Venue Location because Camden is in NJ but is basically next to Pennsylvania and the major city of Philadelphia… so most of the Attendees were from PA even though this show was in NJ.

If you were in Camden Wednesday night you really experienced a special show and one I feel will be looked back on as a legendary show. This was the perfect follow up to their Madison Square Garden 9/11 show. The way Ed described all the positive energy after 9/11, on the day of 9/12; where the entire world united and stood up everywhere for injustice and people were treating others as human beings like they should be and not enemies. People were supporting one another and that’s what this show felt like, the band really brought it and the crowd together with cheering for the deep cuts and inspired the crowd to give it their all on the sing alongs. 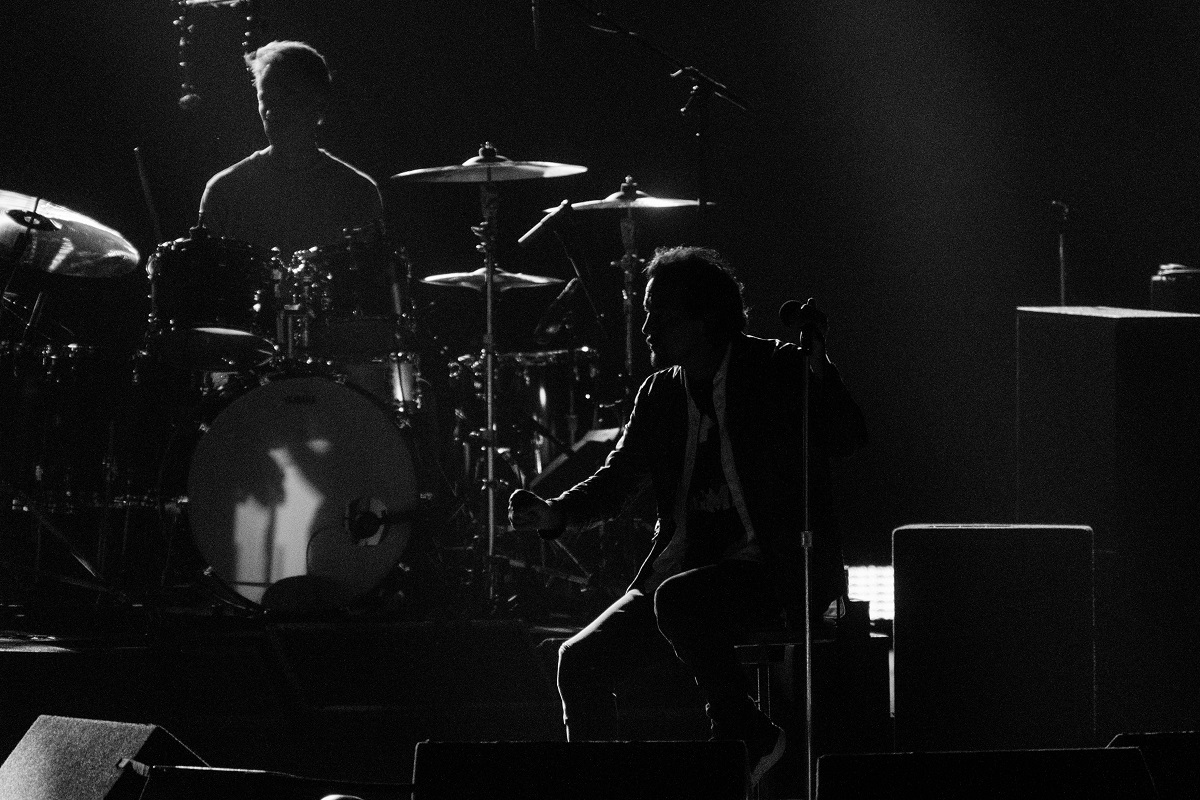 Ed stopped to talk shortly after Oceans to address the crowd and thank everyone for sticking with them and joining them tonight for one of the largest shows of the tour, that really went DEEP into their catalog. I didn’t realize at the time that Ed might have also probably talking about the length of the setlist which turned out to be 28 Songs! The most songs they’ve played since the 2019 tour in Cardiff Whales.

They stayed seated again for the first 3 songs and before starting the next song, Ed shared “We have one more with a bit of composure and then after that we’re going to tear it up…”. Ed laughs as Stone plays that classic opening Hard To Imagine guitar rift. This night during Hard To Imagine the band started to stand up from their stools, as Ed stood up he walked to the back of the stage to grab a guitar from Simon; once he had the guitar set and as Mike and Stone were harmonizing their guitar parts,

Ed turned around with his telecaster to the mic just in time to belt out “Things Were Different Then!… Always Different Then!” The night tranistioned at that moment and turned into a ROCKING night with Animal, Mind Your Manners, Do The Evolution, and Deep. In typical Ed fashion he checks on everyone in the back after Do The Evolution and then introduces Jeff Ament on the 12 string Bass Guitar before saying “Let’s Go Deep” as Matt Cameron counts off the beat and they play a rocking version of Deep! It’s always cool to see Jeff jumping around the stage with that 12 String Hamer Bass Guitar. Stone and Mike also really shined on this one trading licks and solos, it’s such a great song to hear played live! 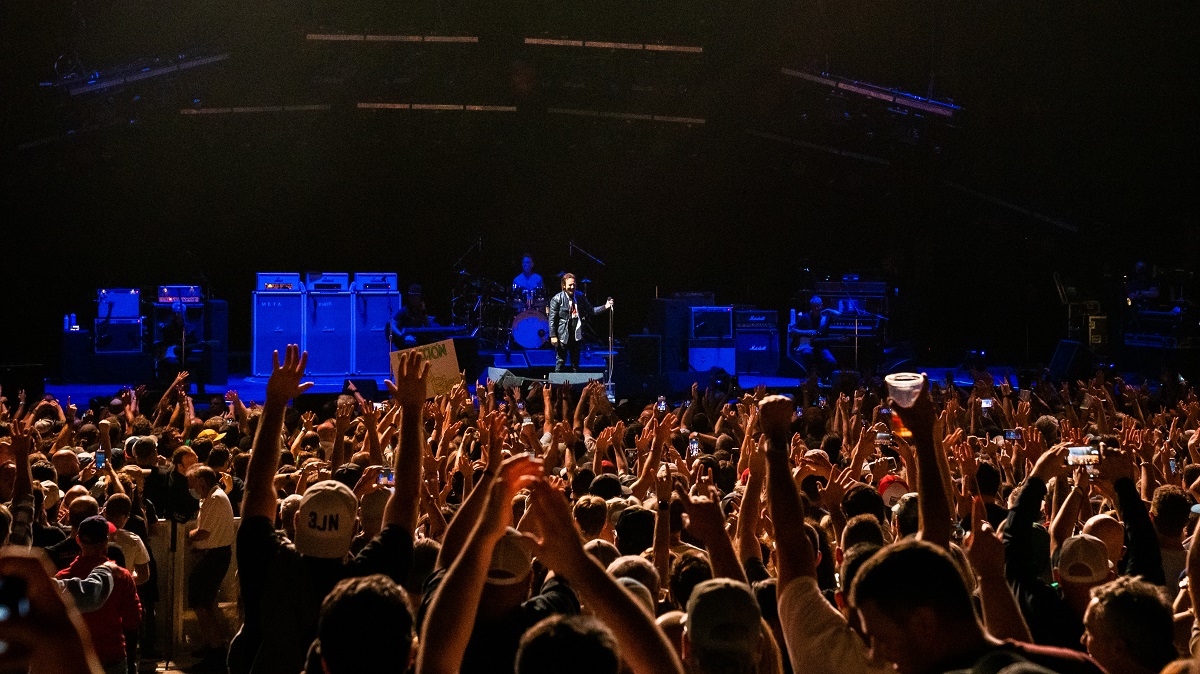 The Interstellar Overdrive segway always means a good song will be coming up next, and this led into a ROCKING version Corduroy, where the crowd was singing so loudly that you could barely hear Ed sing – actually drowning him out a few times on Corduroy and the popular big singalongs. At this point it was already an amazing night and they were only at the halfway point of the first set!?!?

Ed dedicated Given To Fly to one of their friends and “The first one to get superhuman air, before Lebron… before Jordan…” basketball legend Dr. Julius Irving (Dr. J). This was another loud crowd sing along, especially during the chorus:

“And he still gives his love, he just gives it away,
The love he receives is the love that is saved.
And sometimes is seen a strange spot in the sky,
A human being that was given to fly!”

It was 12 songs into the 1st set when they played Quick Escape, the first track of the night off their latest record Gigaton, and one of my personal favorites from the new album to hear live on this tour; along with the follow up song Retrograde which really showcased the range of the bands songwriting including both Boom and Josh. 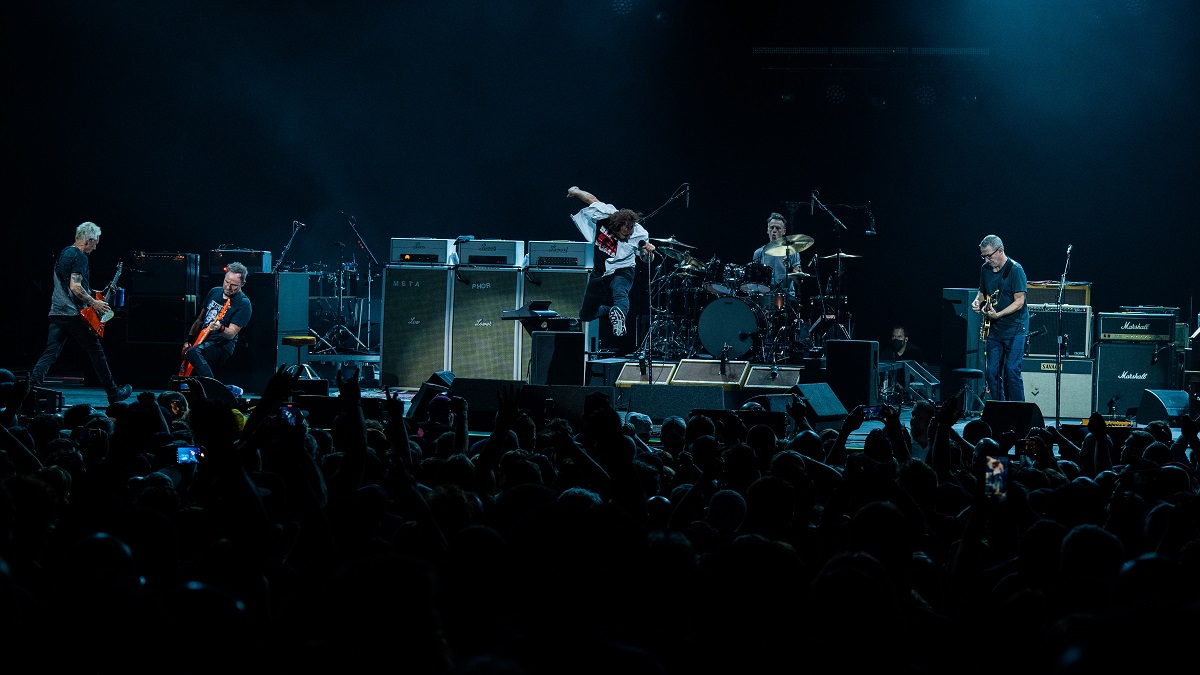 The closing songs of the 1st set included Evenflow, MFC, Not For You, and the opening track off Gigaton, Who Ever Said. Ed talked to the crowd again at this point telling the audience he asked Mike to play this one tonight, which the spotlight then immediately shined on Mike McCready and he performed an EPIC version of the Van Halen song Eruption (Playing Eddie Van Halens Famous Guitar Solo) and then transitioning back Why Go where Jeff broke out the 12 String Hamer Bass again and they closed out the 1st set with a ripping version of Porch!

Pearl Jam returned to the stage after a short set break and addressed the crowd saying “You know we’re not going yet, summer ain’t over yet… we still have people to introduce”. He talked about the dummers we recently lost (Carlie Watts, Taylor Hawkins ) and said how fortunate they are to still have going strong as ever Matt Fucking Cameron on the drum kit! He then introduced Boom Gaspar and finally Josh Klinghoffer, who Ed mentioned Josh’s mom was in attendance. 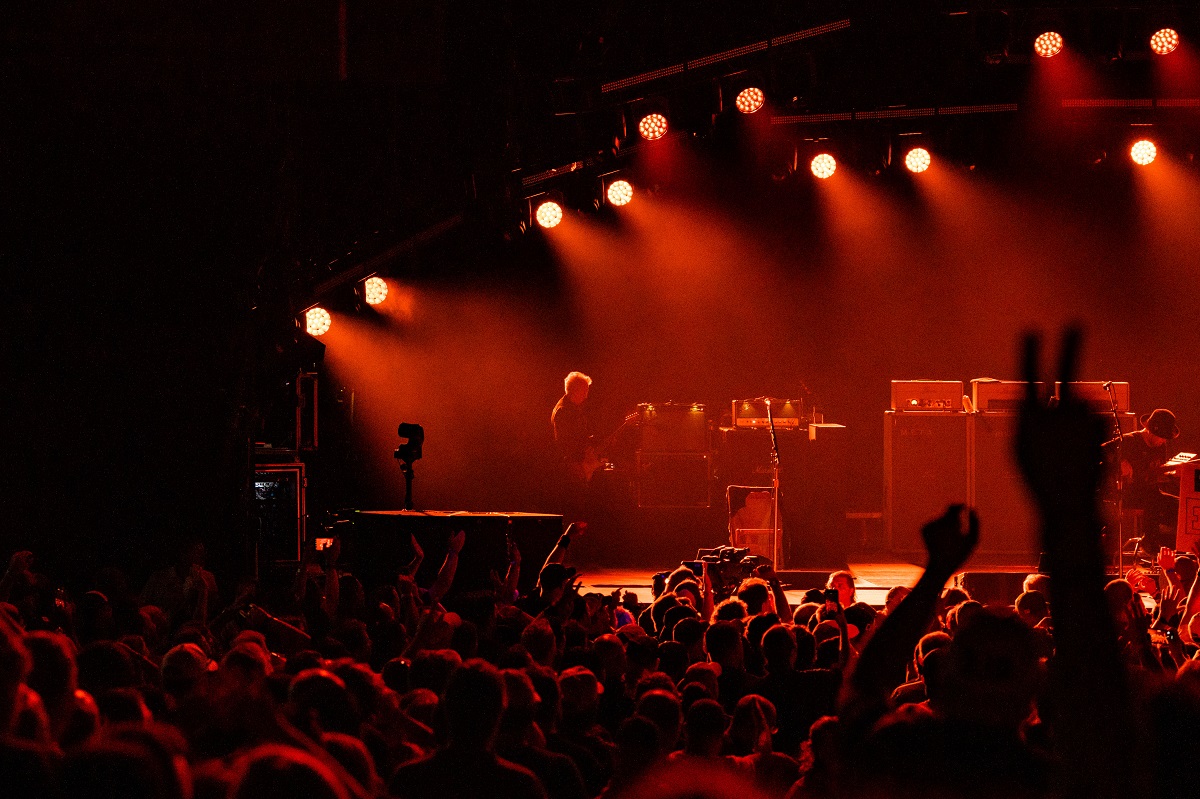 Ed then said “This one we dedicate to a great woman, she knows who she is… it starts with Mike McCready…” Mike played those first chords of Inside Job kicking off the Encore set. This was the 22nd song of the night and totally unexpected for me, there were so many layers on inside job now with Boom and Josh… but my ears focused on the amazing bass riff Jeff Ament was playing. Listening back to it today, my ears pick up and feel his groove still.

The night took an amazing turn next with Pearl Jam breaking out State Of Love And Trust and then inviting out on stage the 2 fans who won the “All In Challenge” for Covid Relief (Raising over 1 Million Dollars) and Ed welcomed them warmly and shared with us that they requested the next song, Breath! It was amazing to hear State Of Love and Trust and Breath back to back! I think that was a first time for me in all my 50+ PJ shows and reminded me of all those times I watched the movie singles and listened to the soundtrack. 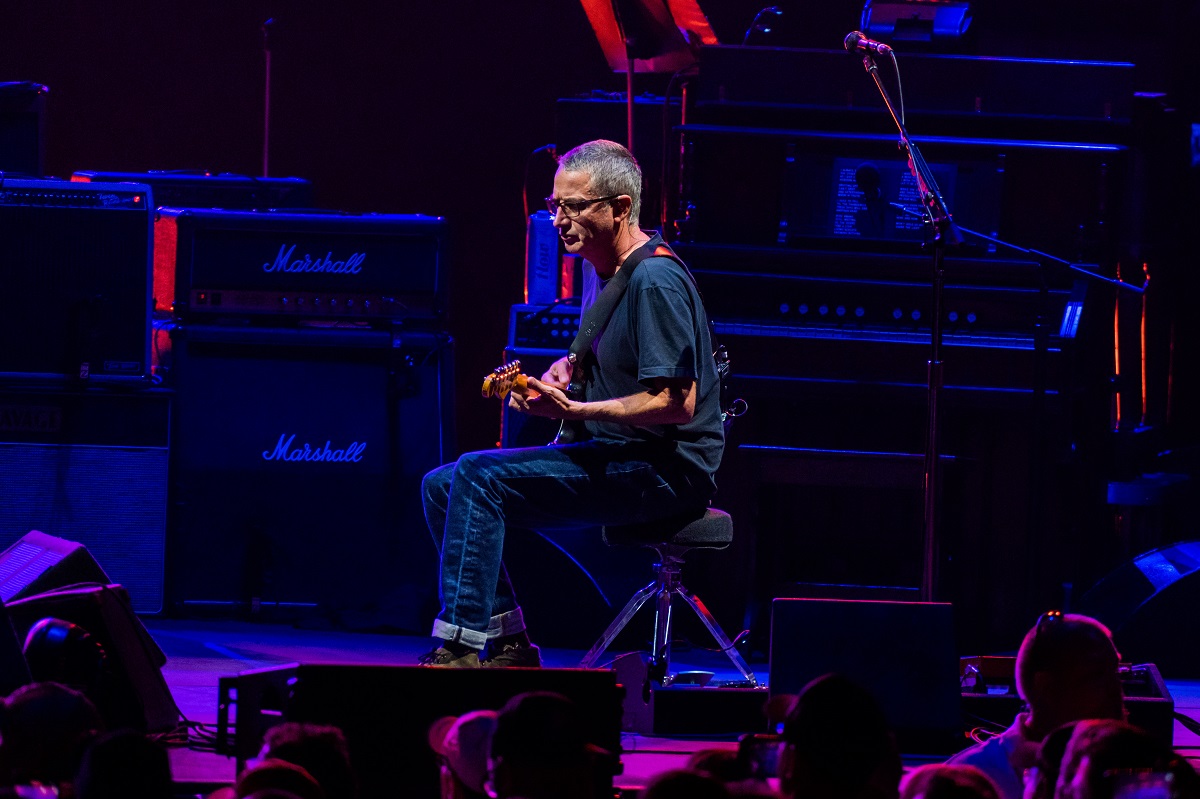 Pearl Jam went further into their catalog on this special night in New Jersey playing 2 more rarely played fan favorites, Crazy Mary and then Leash. Ed found a sign and brought it up to center stage that said “PJ SHOW #108 – Play Leash! Tambourine Please!” Well I’m not sure if they got a tambourine.. But they did get their song request which was pretty awesome! There was a lot of magic happening this night and I still couldn’t believe they were still playing this night with the other sets capping at 20-23 songs max.

McCready broke out his Les Paul again and they played an amazing version of Alive that became a big sing along at the end as the house lights came up! Ed was moving all over the stage going out far left on stones side on the wings of the stage and then coming back around to Mike’s side, connecting and engaging with fans!

Right after Alive, Ed ran to the back of the stage to get his Evel Knievel Jacket and put it on quick as he returned to the mic to start singing Rockin In The Free World. This was an amazing version of Rockin In The Free World, stone even went crazy on his solo and Josh came out from behind his set up to rock out with Mike and Jeff On stage. It was an EPIC ending to a legendary Pearl Jam set. This was a special show that I think will be looked back on as one of those Legendary shows and nights that everyone wishes that had been at… that I feel so so fortunate that I was able to experience and capture for our amazing PJ fan community!

Faithful To You!
Michael 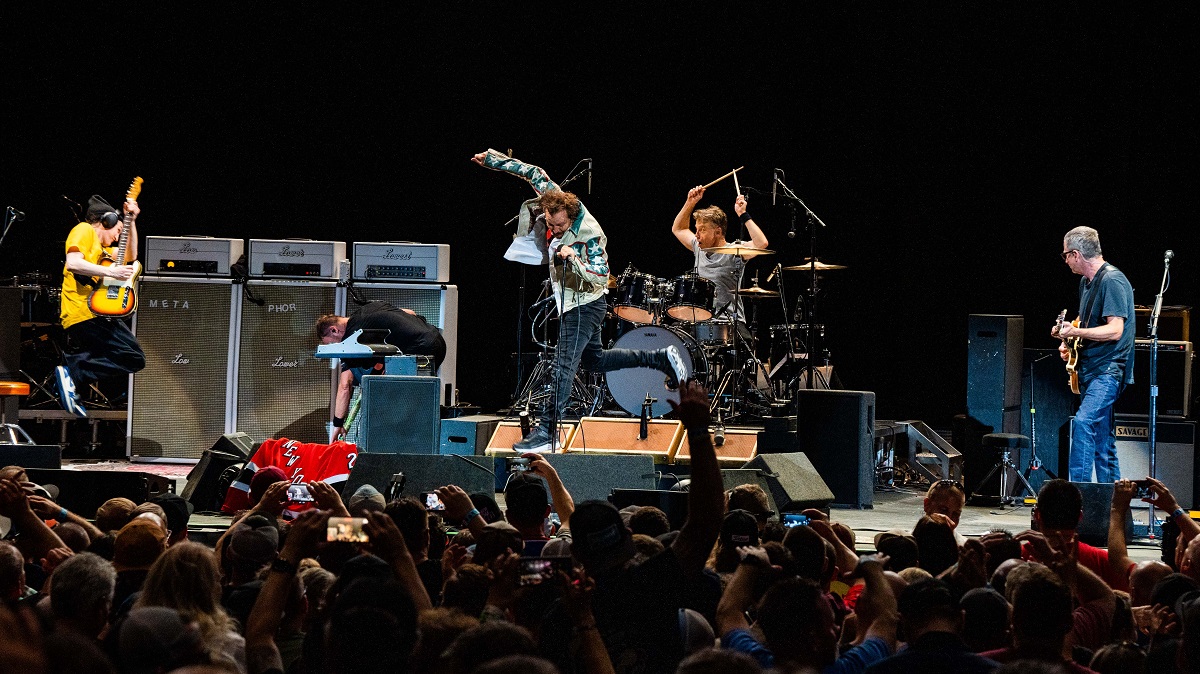