Pearl Jam Online’s exclusive interview with Dave Krusen, Pearl Jam’s first drummer, who recalls the making of “Ten” and his days with the band.

Hi Dave, thank you for taking your time to answer these questions, that’s very kind of you. You were Pearl Jam’s first drummer and played in ‘Ten’, universally acclaimed as the band’s masterpiece. That record turns twenty this year. What are your memories of ‘Ten’ and how do you feel about it now, after two decades?

I had a great time recording Ten. Those guys were a lot of fun to work with. I think the record still sounds great 20 years later.

Jeff Ament and Stone Gossard recruited you in 1990, when Pearl Jam were still called Mookie Blaylock. How did you guys meet and how did you start playing together?

I heard that Jeff and Stone were looking for drummers to jam with and that Jeff Ament’s number was in the phone book so i called him up and brought my drums down a few days later with them and Mike. There was instant musical chemistry.

A couple of years ago, Vedder said: “Krusen was a real hero. He was going through a lot, but he had something really special.” That’s quite a compliment, isn’t it?

I think it was extremely nice of Eddie to make that comment. It is especially flattering because I am a much better drummer these days and I really hold Eddie’s opinion in high regard.

During the ‘Ten’ sessions you guys recorded a lot of songs. Do you remember any particular song that has never seen the light and might still be locked in one of Pearl Jam’s “secret archives”?

“Touch Me I’m Sick” by Mudhoney. I haven’t heard it since we tracked it. I would love to hear that one. 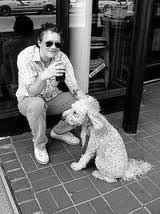 In 1995/1996 you joined Hovercraft, the band of [Ed Vedder’s former wife] Beth Liebling, under the stage name “Karl 3-30”. Actually, you kinda replaced Vedder, who was their live drummer for a short time. Did you see him a lot back at the time? How did your collaboration with Hovercraft begin?

Actually, Eddie called me to come jam with them in 1994, but the timing wasn’t right. Then Beth called me in 1995 and said Eddie had been playing drums but wasn’t going to do it anymore and would i be willing to come down and jam with her and Ryan. Eddie and I were friends of course so I did see him a lot while in that band. We also played a show with him in Rome.

In 1997 you played on the tribute album “Kerouac: Kicks Joy Darkness” with Hovercraft and Ed Vedder on vocals. What are your memories of that session?

Yes, we did that and a Germs tribute compilation.

Have you been involved in the filming of “Pearl Jam Twenty,” Cameron Crowe’s upcoming movie about Pearl Jam? If so, do you have any insights on this?

I have heard about the film, but am not involved with it.

Details are still unknown but there’s a lot of talk about a two-day Pearl Jam themed festival taking place somewhere in the U.S. to celebrate their 20th anniversary. Any chance you might be part of the line up?

I have heard about the two day festival, but have not been contacted about playing in it at this time.

You recently played with Candlebox and Shawn Smith. What are you doing now? If you were asked to rejoin Pearl Jam, would you accept?

I have heard that Wikipedia has a pretty good list of all of the past and current projects that I worked on. Of course, I would love to jam with them anytime-they are a great band and a great group of guys.

Dave, thank you so much for your time. You’re the man!

Glad to be a part of this interview. Take care.