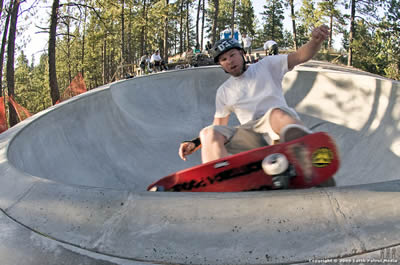 Montanan: Tell me your thoughts on the Missoula skate park, which you were instrumental in building.
Ament: The great thing is I get to use it, too. That project I felt I could not only bring money to it but I’ve been to more than 100 skate parks over the world, so I know the good things and bad things. The skateboard park thing, I think, was a little bit harder to get done because most of the older generations don’t understand what that is. I explain it as it’s kind of like our generation’s version of Harley Davidsons.

Montanan: How did you start playing bass guitar?
Ament: I was into music when I was really young. My friend Reggie and I were rock music fanatics. We read [rock magazines] Circus and Creem. Punk rock was largely the thing that told me I could do it. It was simple and had the kind of energy I wanted. I started playing bass fall of 1981, on the sixth floor of Jesse Hall. Part of it was I had a guitar that I brought to school and I’d taken a few lessons in high school and there was a guy who I met on my floor who was in some punk rock bands in L.A. and his family moved to Butte. He could play both bass and guitar. He had a 1977 Fender Precision bass that he traded me for my Gibson SG.

Montanan: It’s been written that in some of your early bands you pushed your bandmates hard and even lobbied to make commercially successful music, which was a notion they thought was sort of un-punk rock.
Ament: No, that’s not true. I know it’s written on Wikipedia. The thing is, I was in it a little bit more, I didn’t really have a lot of patience for just f***in’ around and doing stuff just for fun. I had a full-time job, none of those guys had full-time jobs, and I wasn’t getting my education and my rent paid for. I said, “I’m going to make a go of this in my twenties. I want to make music. I want to make records. I want to tour. I want to make the most of being in a band. I want to take it seriously.” It wasn’t about being a rock star. I’m as much or more DIY [do-it-yourself] now than I was in ’92. Pearl Jam is putting out its own record this year, and we’re 100 percent in control of every creative aspect of it.

Montanan: If you weren’t driven by a huge desire for commercial success, where did your drive come from?
Ament: That all came from my dad. He taught me that you’ve got to work your ass off in order to survive. My dad probably for my entire life was living paycheck to paycheck. He was intense, and I had to work with him a lot. I sort of despised him for a lot of it, but I have him to blame for a lot of the good things that happened to me because I have a lot of drive and am not afraid to work hard.

Montanan: You moved back to Missoula in part because of the stresses of fame in Seattle. Did you ever have any similar problems in Missoula?
Ament: The only trouble I ever had in Missoula was from people from out of town. In Montana they were respectful or didn’t give a s**t. I appreciate people not really caring that much.

Montanan: Does where you live affect your creativity?
Ament: I always say I moved back because I work best and am most creative when I’m moving at a certain pace. Sometimes that Seattle pace is too much, there’s too much buzz. Missoula has enough of a cultural life that I can go in and out of that buzz. I can go in and get my little piece of culture, listen to a record, or see a movie or see some art and get a little poke and then hole up in my room and play guitar, paint, skateboard, whatever gets me excited. I never get bored, and I think that’s partly from being raised in small town. My imagination is pretty solid. I’m still into all the same s**t I was into when I was twelve. If I’ve got a guitar or a skateboard or a basketball, there’s not a chance in hell I’m going to be bored.